Supermarket chain Sainsbury‘s has seen solid sales growth of 5.6 per cent during the four weeks ending September 15th 2012 following its sponsorship of the Paralympic Games, new data has revealed.

Data company Nielsen reported that the grocer increased its media spend by an astonishing 98 per cent year-on-year to £3.8 million excluding Channel 4 sponsorship in the seven weeks ending September 10th 2012, driven by over £1.2 million spent on its Paralympics advertising.

During the London Olympics, aggregate weekly sales growth across leading supermarkets peaked at four per cent compared to the same week in 2011, while sales growth post-Olympics over the four weeks to September 15th 2012 stabilised at 2.5 per cent year-on-year.

Over the month, soft drink sales grew 10 per cent in value year-on-year while Delicatessen and frozen food sales jumped five per cent and four per cent year-on-year as a result of promotions.

Nielsen believes that this steady performance is thanks to “the afterglow of the London 2012 Olympic and Paralympic Games”, as well as the heat wave that occurred earlier this month.

Mike Watkins, Nielsen UK‘s Head of Retailer Insight, said of the figures: “After a traumatic first six months of the year, there is some good news.

“Whilst value growths are lower than this time last year – due to a low point in inflation – unit growths have been in positive territory for the last 10 weeks and sales volumes in all categories have improved since last year.

“Significantly, the multiples have maintained their level of promotional activity throughout the summer, which continued at 35 per cent of sales during the last four weeks, encouraging the cautious shopper to spend more.

“Retailers will be hoping this sales momentum, generated around London 2012, will keep going during the run up to Christmas.” 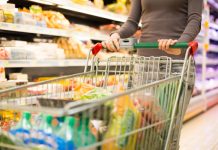