General merchandise retailer Argos has seen total sales leap 5.2 per cent in the eight weeks to March 2nd 2013 as it maintains momentum from Christmas amid the collapse of rival Comet, according to figures released today.

Like-for-like (LFL) sales at Argos climbed 5.2 per cent over the period, driven by strong sales of tablets which helped buoy poor homewares sales.

Online sales remain paramount to the retailer as it continues to realise its digital transformation plan outlined last year, which involves the closure of 75 stores over the next five years while it repositions itself as a “digital retail leader”.

Internet penetration now accounts for 43 per cent of Argos‘ total sales, up three per cent on a year earlier and driven by growth in m-commerce with sales soaring 117 per cent.

Applauding Argos‘ strong results, HRG CEO Terry Duddy said: “Against a backdrop of subdued consumer spending for the new financial year, we will continue to invest and are focussed on delivery of the transformation plan to reinvent Argos as a digital retail leader and the Homebase proposition.”

Meanwhile, Homebase saw total sales dip 2.8 per cent to £191 million and LFLs fell 1.5 per cent as the retailer closed one store in the period, reducing its portfolio by five stores over the year. 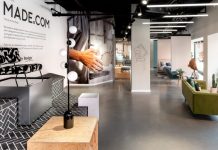