A statement from the companies explained: “The figures reveal a continuing trend between online-only retailers and those who have both an online and physical presence on the high street.

“Similar to what happened in 2012, the performance of online and multichannel retailers converged during the Christmas period, but have since diverged with online outperforming their multichannel counterparts.

“This suggests that shoppers are becoming more confident in the internet as a transaction medium, and a result of the increased adoption of new technologies and services (mobile devices, social media etc.) introduced by online only retailers.”

In terms of sectors, beers, wines and spirits recorded a solid performance a online sales jumped 19 per cent on April 2012 and up 18 per cent month-on-month.

Electricals, however, saw a decline on last year, down three per cent year-on-year against tough comparatives as no long-awaited consumer electronics such as the iPad 3 which was released last year have been launched in 2013.

Meanwhile, sales via mobile devices including smartphones and tablets slowed, falling from 243 per cent year-on-year in March to 131 per cent in April.

A slowdown in growth is “natural” as m-commerce becomes increasingly widespread, noted Chris Webster, VP, Head of Retail Consulting and Technology at Capgemini.

He explained: “Although sales via mobile devices are slowing, the sector continues to grow as retailers invest in the technology to personalise the shopping experience.

“A rise in conversion rates suggests that consumers are using mobile devices to research and purchase goods online while on the move.”

Tina Spooner, Chief Information Officer at IMRG, said that the momentum of online shopping in Q2 is even more evident as “the green shoots if economic recovery have arrived”.

She added: “The solid Index performance in April is ahead of our 12 per cent e-retail growth forecast for 2013, resulting in average growth of 15 per cent year-to-date.

“We expect UK.com to continue to dominate the retail picture as the recovery gathers greater momentum.” 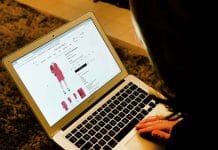