Sainsbury‘s has announced it will build a dark store for the first time to satisfy demand in the growing online grocery sector in the South-East.

The centre will be in Bromley-By-Bow, East London and is due to be completed by 2016. The 185,000 sq ft dark store, so-called because it is not open to the public, will serve as a distribution centre to fulfill online orders and will create 375 jobs.

Jon Rudoe, Sainsbury‘s Director of Online, Digital & Cross-Channel, said he was confident that the new facility would take Sainsbury‘s online grocery operation to the next level.

“The site will be purpose built with the Sainsbury‘s customer in mind and will support our existing store based operation, something that will continue to be the foundation of our online grocery business. It puts us in a perfect position to meet the growing demand in London and the South East.”

Rival Tesco, which has a superstore in Bromley-By-Bow, has seen online group sales rise 13 per cent to over £3bn and has invested in online only centres to serve growing customer demand.

Sainsbury‘s last month announced that its online sales reached £1bn in September, and now has 190,000 customers using its online service every week and has been growing its online offering since its creation in 1999. 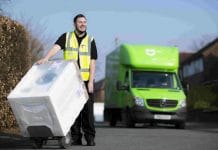