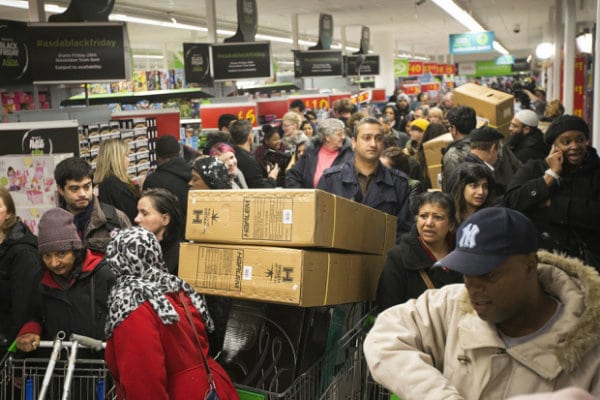 Asda has reported that it will be scaling back its Black Friday discounts for 2015 after the chaos its shops faced last year.

Black Friday 2014 saw eager and ruthless shoppers fighting to get their hands on discounted produce such as televisions and other electronic goods. Asda was disappointed with the financial results of this day due to the big discounts and extra staffing costs, meaning the gains for the retailer were lower than anticipated.

That year Asda is believed to have registered two million sales between 8am and mid-afternoon on Black Friday, which was their busiest single trading day of the year to that point. However, a source from the Guardian commented: “Last year big-ticket items sold at a loss and attempts to ensure safety by forcing shoppers to queue for items meant food sales tanked.”

Black Friday has become the biggest day on the retail calendar. British retailers have aimed to replicate the huge commercial success of the post-Thanksgiving weekend in the US.  In 2014, the total five-week period of Christmas shopping in the UK saw £4bn spent, with £810m contributed by Black Friday.

This year, Asda will consider an online-only approach to discounting goods or will spread deals out over a number of days in an attempt to avoid stampedes in stores.

Many companies are taking the out-of-store approach this year. However, the online approach is a risk due to the careful planning it requires and has the potential to backfire. In 2014 the online shops of a number of large retailers including Currys and Marks & Spencer struggled with demand.

Aldi’s investment will pay “employees more than any other supermarket”

Palmer & Harvey debt revealed to be over £700m