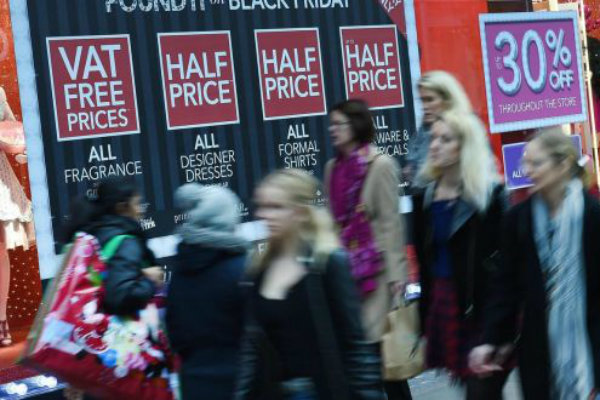 Another import from the USA that, like Halloween, most felt would go away and retailers chose to ignore for too long, Black Friday is here to stay. Despite Asda‘s scaling back of the operation, somewhat ironic as they were one of the key initiators of it over the last three years, other retailers are embracing it more passionately.

So they should if you look at the numbers, it delivered the biggest shopping day of all for John Lewis in 2014, created a massive spike in both footfall in participating stores and online sales. In fact it eclipsed Cyber Monday by racking up 180M UK retail site visits on one day, with an estimated online spend of £810M – if you say no to this, you have to be brave.

Inevitably it brings some issues. Scuffling over cheap televisions at Asda Wembley and shots of fights outside Tesco stores in Manchester merely brings into focus the lack of preparation some retailers had put into handling the event. If you hype something to be the biggest sales day of the year then expect to have to manage some chaos, if not you turn the positive PR into very negative PR. Asda‘s decision is no doubt a reflection of bad publicity, coupled with the fact that poor management generates little profit. If customers rush in to the sales items, pick a low or no margin product up and rush out, then unsurprisingly the retailer feels a little cheated.

Retailers have been experiencing this sort of “cherry picking” for years in promotional cycles, they need to handle it better. If Asda had appropriate security, limits on store entrants, displays that were easy to select from then Asda would once again be hyping the event. The fact that they have curled their tail and backed away is either due to a hand on the shoulder from Wal-Mart or a recognition of their inability to operate it successfully. John Lewis have stated that they are ambivalent about the day, recognising the volume and traffic increase but struggling to keep it margin positive. What a great problem to have, too many customers coming in to see the products, all looking for a deal. Let‘s not suggest that this isn‘t something that good retailers can turn to their advantage. Give a savvy retailer footfall and they will convert, even on bargain days like this. It just takes a little more thought on product selection, display and advance volume buying.

So what is the future for Black Friday? If retailers prepare, manage to gain additional footfall as well as clicks towards products that they can make money on through astute buying and good merchandising, then it‘s here to stay. This will likely be the case and that those, like Asda who have stated they will invest the £26m on products throughout the season instead, will regret the decision. Having an additional sales spike before the big Christmas rush is beneficial to all who participate and leaves those who don‘t wondering why their stores are empty that day. One thing about retail, not just in the UK but across every country, customers love a bargain. It‘s up to the retailer to ensure that they always get one, and that they make money from it.