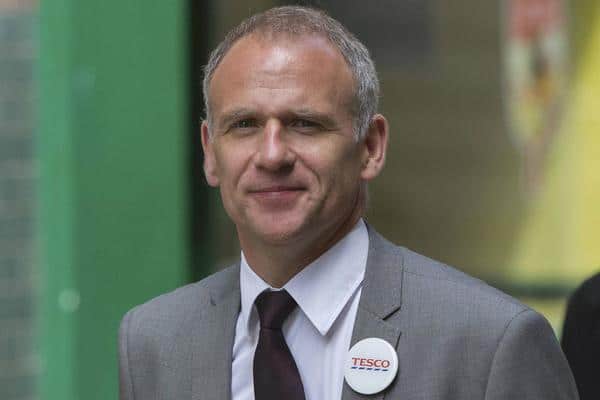 This time last year Tesco went down for making the biggest known loss in its history. £6.33bn was wiped off at Britain’s biggest supermarket following the aftermath of an accounting scandal that changed the course of the grocer’s image. Today, the business has reported a swift turnaround, with pre-tax profits of £162m.

This is “significant progress” for the big four player, which has posted annual results for the year to 27 February.

A 0.9% rise in UK like-for-like sales for the fourth quarter was also praised, being Tesco’s first full quarter of growth since 2013.

Tesco continues to cut prices to stay relevant in a “challenging, deflationary and uncertain market” however, which means the rate of improvement will be slow and steady.

“We have made significant progress against the priorities we set out in October 2014,” said CEO Dave Lewis, who is leading the retailer’s revival.

“We have regained competitiveness in the UK with significantly better service, a simpler range, record levels of availability and lower and more stable prices.”

In the last financial year, the supermarket operator said it had improved service by adding 9,000 “customer-facing” roles,  slashing prices across thousands of products and introducing 2,000 lines. To cut costs, Lewis reduced head office based roles by 25% and closed 60 unprofitable stores.

These results, when taking finance costs out of consideration, reveal an operating profit of £1.05bn, up from a £5.75bn loss the year before.

“With Tesco hemmed in on all sides by ruthless competition and food price deflation, it‘s a delicate manoeuvre that requires both skill and vision. Yes the turnaround is painfully slow, but for the Tesco behemoth to have begun its pivot without hitting the rocks is a huge achievement.

“For a brand that last year posted the largest ever loss on the UK high street, the return to sales growth for the first time in more than three years feels like a transformation. Yet much more work – and pain – lie ahead. Better service and brutal price cuts have won back customers and boosted sales, but the cost has been to the bottom line. Tesco‘s profits are now less than a quarter of the £4billion achieved just four years ago.

But with all the major grocers dropping prices and a backdrop of food price deflation, a quick turnaround was never going to be possible. The challenge for Tesco now is to keep up the momentum and stay in the game while keeping market share. Tesco‘s vast size is an advantage – as it allows the fallen giant to keep down prices for longer than its rivals. In the current war of attrition, this could prove a decisive factor.”