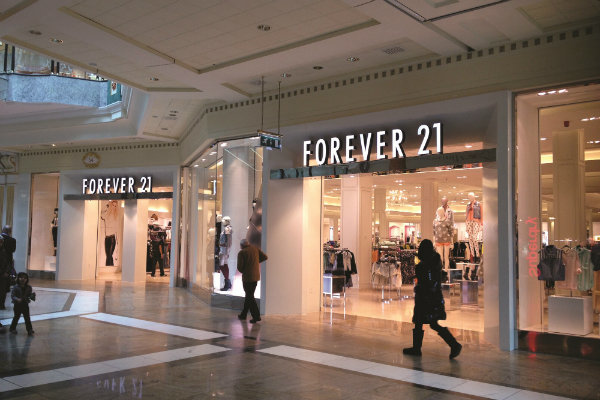 Forever 21 has shut its 67,940 sq ft store at Westfield Stratford, leaving a sign in the window reading: “This store is now closed, sorry for the inconvenience. Your nearest branches are Oxford Street, lakeside and Bluewater.”

Drapers reported in September that Forever 21 has been scaling back its estate in the UK. Other closures include a 20,000ft outlet at the Intu Trafford Centre in Manchester.

There has been speculation that the next store to close will be at the Intu Lakeside Shopping Centre in Essex. It is also rumoured, but unconfirmed, that Forever 21 will be downsizing its stores in Dublin and Kent.

Forever 21‘s latest results filed at Companies House are for the year ending 28 February 2014. They showed an increase in turnover from £37.1m to £48.3m at the UK arm, while pre-tax losses were reduced from £66.5m to £18.4m. However, pre-tax losses at the Dublin store almost quintupled, reaching £6.59m. Updated accounts are currently overdue.

“Forever 21 is constantly evaluating our portfolio of stores and has confirmed three recent store closures in the United Kingdom, specifically in Stratford, Lakeside and Glasgow,” Forever 21 told Retail Gazette. “We made the decision to close these stores after careful consideration of the long-term profitability of the particular locations. Forever 21 will continue to operate multiple stores across the United Kingdom, where our customers will continue to have access to the fast fashion they have come to love and expect from Forever 21.”

In January last year Forever 21 announced plans to open 50 new stores over three years in locations across Europe, including the UK. The chain counts for 10% of the American clothing market, and opened its first ever European store in Birmingham in 2010.