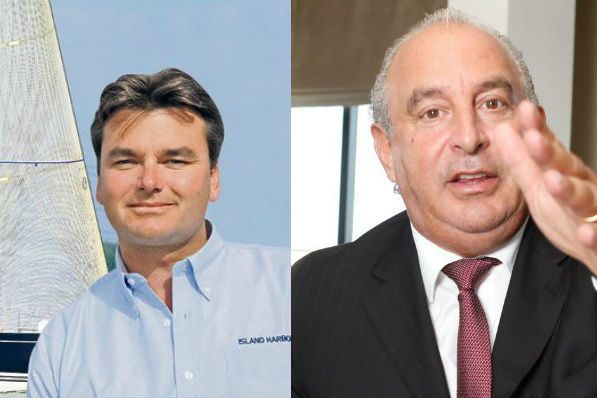 The Pensions Regulator has begun enforcement action against Sir Philip Green and Dominic Chappell, signalling a possibility they could be forced to fork out money to fill the £571 million deficit in BHS‘ pensions scheme.

The watchdog sent warning notices to Green and his holding company Taveta, as well as Chappell and his firm Retail Acquisitions, which set out evidence to support the use of the regulator’s powers to demand a “specified sum of money” and to “put ongoing support in place for a pensions scheme”.

The watchdog also said it issued the notices after a “complex investigation”, with each comprising of more than 300 pages – complete with arguments and evidence as to why it believes Green and Chappell should be liable to support the BHS pension schemes.

Green, who had owned BHS for 15 years as part of his Arcadia Group retail empire, infamously sold the department store chain to serial bankrupt Chappell in March 2015 for just £1.

Just over a year later in April 2016, BHS went into administration, leaving 11,000 out of work and a massive pension black hole.

Since then Green and Chappell have been grilled by MPs to provide evidence, and a government report concluded that Green was largely to blame for selling BHS to a “manifestly unsuitable” buyer.

Green also faces the possibility of losing his knighthood after Westminster recently backed a motion for him to be stripped of the honour.

Pensions Regulator chief executive Lesley Titcomb said: “We have been clear in our public commitment to make significant progress by the end of 2016 and the issue of these notices meets that commitment.

“Our decision to launch enforcement action is an important milestone in our work to attain redress for the thousands of members of BHS schemes who have been placed in this position through no fault of their own.

“Issuing warning notices at this time reflects the outcome of our investigations and that we are yet to receive a sufficiently credible and comprehensive offer in respect of the BHS schemes.

“We continue to pursue the best deal for members of the BHS pension schemes. If parties wish to approach us with settlement offers, that course remains open to them.”

The regulator said the warning notices sent to Green and Taveta were different to those issued to Chappell and Retail Acquisitions.

The move was welcomed by MPs, who said the regulator had “lost patience” with Green‘s “empty promises”.

Work and Pensions Committee chair Frank Field said: “We are not surprised that the Pensions Regulator has, like all the rest of us, lost patience with Sir Philip Green’s excuses and empty promises.

“His answer throughout our inquiry was always that he was going to ‘sort’ the disastrous position he left the pension fund in when he sold off BHS to Dominic Chappell for £1.

“We are glad to see TPR (the Pensions Regulator) is now calling his bluff and instigating enforcement proceedings.

“It seems clear Sir Philip would rather kick the can down the road and avoid responsibility than come up with any fair, sustainable settlement for BHS pensioners.”