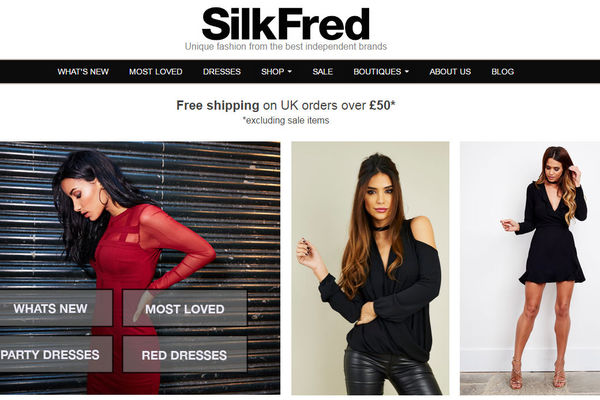 When Emma Watkinson was asked why she devotes her career to supporting and providing a platform for independent brands to sell their wares, her response was simple.

“Working with them is an incredibly rewarding thing to do,” she said.

“From a business angle it just works. They‘re so much more agile, they can react to industry changes a lot more quickly than bigger brands, and it‘s more interesting for the customers.”

Watkinson, 29, is the co-founder and chief executive of London-based independent online retailer SilkFred.com.

The idea first for SilkFred first came to Watkinson in 2011, when she identified a gap in the retail sector and wanted to offer emerging fashion designers or established non-high street labels a place to have their work recognised and available to the wider market.

“One of the ways in which SilkFred started is similar to how a lot of businesses start: you recognise that there‘s a problem that needs solving, and then you create something around that,” Watkinson told the Retail Gazette.

The realisation of this gap in the retail sector came when a friend of hers had invested in a small independent designer. Things were not going so well, so the friend asked Watkinson and her co-founder to analyse the business, given her background in buying and merchandising and her co-founder‘s background in financial trading.

“What this brand really needed was the expertise and a route to market and some budget,” Watkinson, pictured above, recalled.

“We decided the best way to solve her problem and other brands like this was to take them all to market.

“The penny dropped and we realised we were on to something when hundreds of new brands were asking me every day to give them an opportunity.”

Launched in early 2012, and enjoying a successful crowdfunding campaign in 2013, Watkinson said SilkFred has grown by 400 per cent and now welcomes 800,000 online visitors per month.

She added that the name of her retail business was a play on the phrase “silk thread”. The site was also intended to have some sort social network feature about it.

“Really what we‘re trying to get at is a like-minded community that were connected by a thread,” she said.

“The actual initial concept of SilkFred was that it was marketplace that had this whole social network feature wrapped around it where people can see what everyone else was buying, but this was in 2011 when everyone was trying to create their own social network.

“We didn‘t know so much about that so we never actually built that, but we do know about buying clothes.

“And the name SilkFred kind of just had its own personality, we liked it, it‘s quirky.”

“[Independent retailers] are so much more agile, they can react to industry changes a lot more quickly than bigger brands, and it‘s more interesting for the customers.”

Watkinson has always had a keen interest in fashion. While studying English at the University of Liverpool she grew her knowledge of retail through experience on the shop-floor. After she graduated, she moved to Spain to work in buying, merchandising and management at a boutique luxury retail chain, overseeing a team of 20 sales staff at the age of 24.

“I just had all this responsibility chucked at me, I was a real multi-tasker,” Watkinson said.

After a few years in Spain, she left for New York for editorial experience interning at fashion magazines. It was during her time there that her desire to return to retail became apparent.

A move back to the UK saw her joining luxury online boutique MyWardrobe.com, working with the buying and merchandising teams. Here she developed skills in identifying product trends, and it was also here that she noticed smaller independent brands had no clear route to market.

After seven months at MyWardrobe, she made the difficult decision to leave to establish SilkFred.

“It was a big decision to leave it, unfortunately my parents weren‘t too happy with it,” Watkinson recalled.

“MyWardrobe didn‘t succeed in the end but it was really interesting and I learned a lot there.

“One of the reasons that impacted my decision to leave was that I always liked touching different area of the business…. I find that element of how it all fits together and how it all works together the most interesting part of any company, kind of doing a little bit of everything, which I missed.”

CLICK HERE to read previous “Indie of the Month” features

Watkinson believes SilkFred has helped revolutionised the digital retail landscape and is one of the UK‘s leading destinations for independent fashion and accessory brands.

She said much of SilkFred‘s success is owed shoppers who visit the etailer to “feel a little bit different in their every day dressing”.

“Some retailers will say ‘wear this brand, and we stand for this and this is our customer and she wears X‘, and then they kind of have to stick the stake in the sand and say ‘this is what we are‘,” Watkinson said.

“But our customers can do whatever they want at any given time, there‘s so much choice and so many different styles.

“Whether it‘s something interesting to wear to work or something fun to wear for a girls‘ weekend to Ibiza or a party dress to go out with the girls, or something really cute for that hot date or even if it‘s just going to the pub – they can buy something that you won‘t necessarily find anywhere else.”

While SilkFred has been featured in countless media outlets and gained a handful of business awards nominations, Watkinson said her business‘ power to help over 290 fashion designers succeed has been the most rewarding part.

“We‘re reaching a lot more people and that‘s really exciting, people know who we are now and I don‘t really have to explain what SilkFred is as much as I used to,” she said.

“We‘ve taken brands from zero to millions, to see their team grow and develop alongside our own.”