Sports Direct has announced that it owns a 19.3 per cent stake in Finish Line, the American retailer owned by rival firm JD Sports.

The sportswear firm said in a statement that it now owns 8 million shares in Finish Line, in a characteristically strategic investment for its boss Mike Ashley.

JD Sports announced the £396 million acquisition of Finish Line in late March, breaking into the US market for the first time, adding its 556 stores and 563 concessions to its network.

Ashley has gained a reputation for buying up shares in rival retailers and has amassed a respectable portfolio.

In March Sports Direct grew its stake Debenhams to 29.7 per cent, just below the 30 per cent threshold where it would be required to make a formal takeover bid. It also owns a 27 per cent stake in French Connection, and a 26 per cent stake in Game.

Seven years ago, Ashley is understood to said he would “finish off” JD Sports, its key competitor on the high street.

Despite now being the second largest shareholder in JD’s American arm, Sports Direct is struggling to match its performance in the UK.

Earlier this month JD reported profit growth of 24 per cent, breaking records to hit £294 million for the year to February 3.

Meanwhile Sports Direct revealed a near 70 per cent drop in profits last December to 45.8 million for its half year. 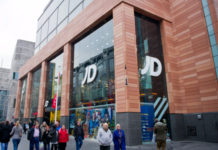