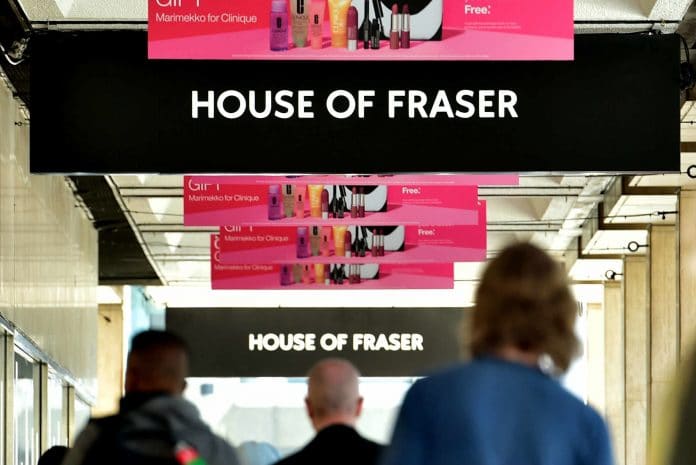 Mike Ashley has promised to turn House of Fraser into the “Harrods of the high street” after he bought the embattled department store out of administration for £90 million.

However, questions have been raised over House of Fraser’s pension schemes, with reports indicating that staff members below the retirement age could face cuts to their benefits.

Ashley has pledged to keep “as many stores open as possible” but stopped short of clarifying how the takeover deal by his firm, Sports Direct, would affect House of Fraser’s 59 shops and 16,000-plus staff.

The takeover deal was struck through a pre-pack administration process, where a company is put into administration before a new buyer cherry picks the best assets.

Ashley – who owned an 11 per cent stake in House of Fraser before his takeover – beat off competition from rival Philip Day, the billionaire owner of the Edinburgh Woollen Mill Group.

Auditing firm EY had been appointed administrators for House of Fraser on Friday morning, when the retailer officially collapsed after a tumultuous couple of months.

Less than six hours after taking on the role of administrators, EY opted for the pre-pack administration offer from Ashley’s Sports Direct.

It has since emerged that Sports Direct bought the House of Fraser brand, assets and stock – but will not control its pension scheme, placing the benefits of its 10,000 pension holders at risk.

According to Drapers, £600,000 is available to unsecured creditors – such as suppliers, landlords and House of Fraser’s pension holders – under the prescribed part of insolvency legislation.

And according to The Sunday Times, House of Fraser’s banks and bondholders will lose an estimated 77p for every pound lent.

Since Ashley’s takeover the retailer’s pension funds, which have a combined deficit of £160 million to £170 million, have entered an assessment period for entry to the Pension Protection Fund (PPF).

The PPF may decide to cut benefits by 10 per cent for those below retirement age and pay less generous inflation-linked increases to all members.

House of Fraser’s pension funds have 5000 members below retirement age.

The news comes after Ashley said in a stock market announcement that the takeover of House of Fraser was a “massive step forward” for Sports Direct.

“We will do our best to keep as many stores open as possible,” he said.

“It is vital that we restore the right level of ongoing relationships with the luxury brands.

“Our deal was conservative, consistent and simple. My ambition is to transform House of Fraser into the Harrods of the high street.”

Despite this, there is speculation that Ashley could convert House of Fraser stores into Sports Direct outlets and rebrand others as Flannels, his existing upmarket fashion retail fascia.

The retail tycoon has long held ambitions to own a department store.

His previous 11 per cent stake in House of Fraser came after he after narrowly missed out when China’s Nanjing Cenbest, part of the Sanpower conglomerate, secured a £500 million deal to become majority owners four years ago.

He currently has a 29 per cent stake in Debenhams, just a few percentage points shy of launching a takeover bid.

He also has interests in Goals Soccer Centres and French Connection and speculation is now rife that he could seek a merger of Debenhams and House of Fraser.

Prior to House of Fraser’s collapse last week, Chinese investment firm C.banner – also the owner of toy retailer Hamleys – had promised a cash injection of £70 million, which was conditional on the implementation of its CVA that creditors approved in June.

Additionally, Nanjing Cenbest had signed a memorandum of understanding that C.banner would purchase a 51 per cent stake in the department store after the CVA process was complete.

The CVA featured plans to close down 31 of House of Fraser’s 59 stores, rents reductions on 10 stores that were to have remained open, a relocation of offices, and 6000 job cuts.

However, C.banner withdrew its planned cash injection in late July, a day after influential credit ratings agency Moody’s judged House of Fraser to be in technical default on its loans, downgrading it from the “very high risk” rating it received in December.

The withdrawal prompted House of Fraser to urgently scramble for new investors ahead of quarterly rent bills and to buy enough stock for the crucial Christmas trading period.

Had Ashley not bought the department store out of administration, House of Fraser could have become the biggest high street casualty since the fall of BHS.