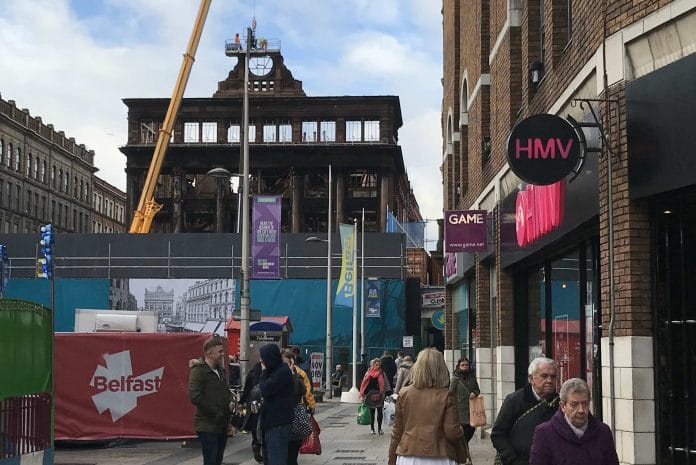 Beflast is experiencing a welcome surge in footfall after the recent Primark fire, with shops in the city centre recording a 20 per cent year-on-year increase in shoppers visiting during the Christmas rush.

According to data compiled by the city’s business improvement district Belfast One, and seen by Press Association, footfall figures indicate that shoppers who had stayed away in recent months are now returning en masse.

The data also indicated that December 14 was the Northern Irish capital’s busiest shopping day of the year to date.

Additionally, city centre footfall across the whole of 2018 was up five per cent year-on-year, bucking a downward trend experienced on other UK high streets.

The news comes after months of disruption caused by the fire in the historic Bank Buildings, which housed the Belfast branch of Primark.

The fire forced the closure of a main city centre junction for months, and shops within the safety cordon around the destroyed building were closed.

This subsequently had an adverse impact on Belfast’s retail sales and footfall.

Primark, Belfast City Council and the Treasury have all contributed to multimillion-pound recovery efforts.

This included the “Belfast Alive” ad campaign, some winter-themed visitor attractions to attract visitors and the re-opening of Primark in a different location in Belfast city centre.

The council has also opened a walkway beside the fire cordon in time for the Christmas shopping season, re-connecting a main shopping thoroughfare and enabling some of the closed retailers to re-open for business.

However, restrictions remain in place as Primark works to dismantle and make safe the Bank Buildings ahead of a major rebuild project.