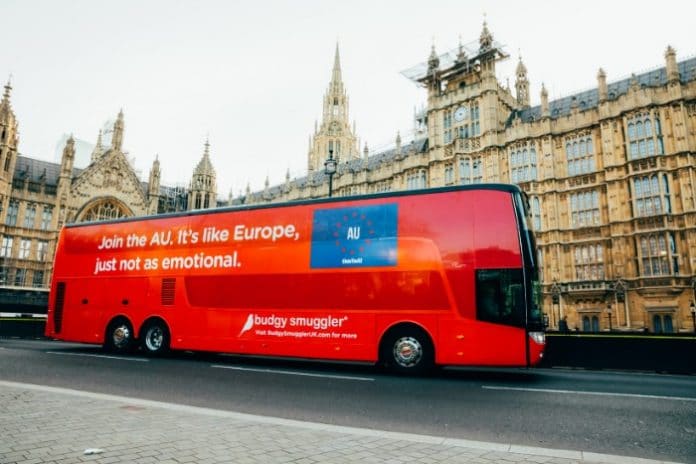 With the UK’s future in the EU now hanging in the balance, it doesn’t have to be all doom and gloom.

Earlier this week, Australian swimwear brand and online retailer Budgy Smuggler launched a campaign that urged British MPs to consider a new proposal: to “forget the EU” and “join the AU”.

The cheeky campaign – pun most certainly intended – was unveiled when parliament was in the midst of a vote on possible Brexit outcomes. Using the #JoinTheAU hashtag, the swimwear brand wants to see the formation of “a new super union between two great nations”.

The launch even had a branded bus outside Westminster Palace that emulated the controversial £350 million NHS campaign bus during the Brexit referendum, but with different slogans.

One side of the bus read “Join the AU. It’s like Europe, just not as emotional” while the other side read “Brexit the EU. Brenter the AU”.

Accompanying the bus were a group of people wearing nothing but #JoinTheAU-themed budgie smugglers – which, in case you didn’t know, is Australian slang for speedos, and hence the name of the swimwear brand.

(Side note: “budgie” is slang for the budgerigar, the small parrot native to Australia and the somewhat metaphorical nickname for speedos came about because of, er, the visible “lump” when a man wears a pair.)

The #JoinTheAU campaign also features short clip and and co-ordinated PR and influencer activity across the UK and Australia.

Meanwhile in Australia, a group of #JoinTheAU advocates also dressed in nothing but their AU budgie mugglers, announced the campaign on Sydney’s world-famous Bondi Beach.

“As a brand with offices in Australia and the UK – which is our UK/Europe base – we’ve been watching intently as Brexit has unfolded, and to be honest it looks like a complete shit fight, so we thought we’d extend an olive/eucalyptus branch from sunny Australia,” said Adam Linforth, chief smuggler and head of the #JoinTheAU campaign.

“When we heard that Parliament had seized control of Brexit and were holding an extraordinary session, we realised that we hadn’t seen any extraordinary solutions.

“So, we took some initiative and have provided an option that hopefully British MPs can support – head down under and #JoinTheAU.”