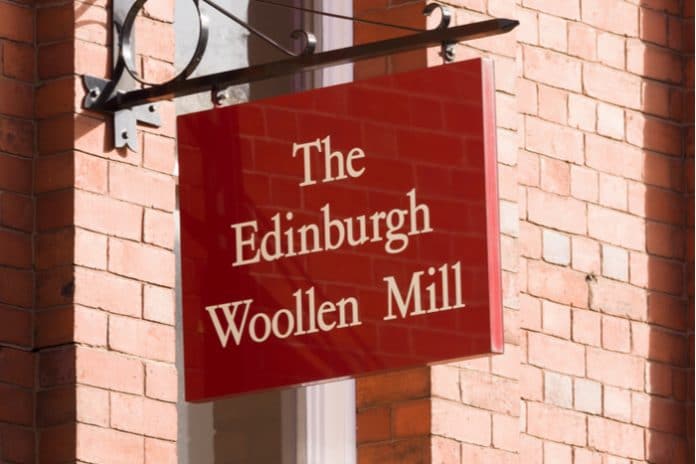 // EWM’s Peacocks fascia had pre-tax profit of £66.5m for the same period

// 14 months since acquisition, EWM turned around Jaeger, with underlying losses more than halved to £3.86m

The Edinburgh Woollen Mill Group has recorded a profit in a period which saw it add several new retail brands to its portfolio.

The firm, owned by billionaire Philip Day, has filed new accounts to Companies House showing a pre-tax profit of £81.2 million for the 18 month period ending August 25, 2018.

Meanwhile, the company raked in £935.8 million in revenues for the same 18-month period.

Its previous trading update, which covered a one-year period, came in at £592.1 million.

In its first 14 months since acquisition, EWM said it turned around the fortunes of Jaeger, revealing underlying losses came of £3.86 million on a 12-monthly basis.

This was half the run rate loss of £7.1 million in the year prior to Jaeger’s administration in 2017.

Meanwhile, EWM said its net asset position improved to £406.4 million, compared to the £382.6 million recorded in its last trading update.

“In the face of a challenging retail environment, our commitment to the physical high street and relentless focus on our customers’ wants and needs has enabled us to, again, stand out from the crowd,” EWM chief commercial officer Steve Simpson said.

Jaeger is one of a number of retail businesses picked up by EWM in the last few years, as it seeks to grow its luxury division.

It has also snapped up Austin Reed, Berwin, and the Calvetron Brands portfolio which includes Jacques Vert, Dash, Eastex and Windmoor.

Following the buying spree, EWM Group created a new head office in London’s Victoria combining the teams of each brand.

Meanwhile, EWM said its resistance to “discount culture” had allowed it to ease pressure on margins, while a focus on quality is expected to yield results as consumers become more environmentally conscious.

“We have also continued to focus on product and build quality, as consumers’ buying decisions are increasingly made on the basis on long-term value rather than impulse,” Simpson said.

“This means that we must retail a product not only at an attractive price point, but also ensure it has a fashionable look and inherent product quality. In short, we continue to focus on providing exceptional value for money.”

EWM has previously expressed its intention to roll out Days, its department store concept which currently operates at a single location in Carmarthen, to as many as 50 sites.

However, the expansion has been put on the back-burner while the group prioritises investment in the luxury division.

Day himself was also one of the bidders eyeing up House of Fraser last year as the department store went into administration, although he lost to Mike Ashley’s Sports Direct.

The retail tycoon has more recently launched a bid to take over womenswear retailer Bonmarche.

Although the offer was still on the table, Day’s team said in May they would take a “step back” to see if the retailer’s current management can deliver on their strategy.