When Julian Dunkerton and James Holder opened Superdry from a stall in Cheltenham market, little did they know it would grow to become a fashion label that had the backing of celebrities like David Beckham and Idris Elba.

But 16 years after its founding, the fashion retailer is on the decline. This month, Superdry issued a profit warning after sales dropped during the key Christmas trading period. It wasn’t the first lacklustre trading update from the British retailer either, having been plagued by them for the past year or so.

The retailer blamed its old products on the 16 per cent sales drop in the 10 weeks to January 4, as its new lines were not enough to avoid a downgrade to profit. Despite a strong Black Friday, the crucial festive period was tough, Superdry said.

The retailer is currently in the midst of chartering a new course after a boardroom battle that grabbed headlines. Dunkerton’s fallout with Superdry began when he stepped down as chief executive and from the board in March 2018. But as Superdry’s fortunes began to decline, Dunkerton staged a campaign in the media which led to his dramatic return to the board in April 2019, after a shareholder vote that saw him marginally win.

Upon his return, he cancelled Superdry’s planned debut kidswear collection and pulled out of a footwear licensing deal with Pentland brands. He also voiced that he wanted Superdry to focus on the jackets and hoodies that it was renowned for, and offer a far wider range of variations on the web.

Dunkerton’s strategies as part of Superdry’s turnaround plan include:

“Everyone at Superdry continues to work intensively to deliver the turnaround of the business,” he said in Superdry’s golden quarter trading update.

“While we have always said it will take time, we continue to make progress in implementing our strategy.”

Although Dunkerton’s turnaround strategy is still in its early days, the Retail Gazette examined why it has been in decline in recent years, and how it can go back into fashion.

Superdry is arguably recognised for its jackets and hoodies, but over the years the public has seen it release additional ranges such as water bottles, pencil cases and watches. Could product diversification be adversely affecting the retailer?

“Product diversification shouldn’t harm the way a brand is perceived or how its core products are purchased if delivered effectively.”

Ian Jones, founder of loyalty app Lolo, argued that Superdry’s problem was not that it’s diversifying products, but rather it has lagged behind in product development.

Conceivably, Superdry may benefit from a product design overhaul in order to reinvigorate the business. Many retailers have undertaken this in the past – notably Asos and Boohoo.

Both have included the promotion of plus-size models, inclusivity and unedited images of women modelling their clothes, while releasing plus size ranges and straight-off-the-runway designs, leaving the likes of Marks & Spencer and Bonmarche lagging behind.

Hilary Collins, founder of Big Wave PR, said Superdry was “bang on trend” when it first started out, but went downhill once it reached its peak.

“Trendsetters used to want to be seen in the latest Superdry sweatshirt or coat, but in recent years their sweaters have been donned by mums and dads on shopping trips to supermarkets – not the style conscious,” she said.

Superdry has arguably relied on its name alone to sell products rather than push on the quality or design, but as the Superdry name is not as coveted as it once was, the brand needs to rethink its direction and key selling point.

Retail Connections chairman Chris Field suggested that Superdry’s way back to becoming trendy again would be by designing capsule collections endorsed by celebrities or social media influencers. He said this would lead to consumers talking about the brand again.

“Superdry have only around 1/10th of the Instagram followers of competitors such as Hollister for example so they have a lot of catching up to do in this key communication channel,” he said.

“They aren’t taking advantage of influencers.”

“It must look at social media platforms, particularly Instagram, in order to make sure it’s appealing to its target audience,” he explained.

“The current demographic is fashion conscious and known for brand disloyalty so if there’s a better offer and service elsewhere, customers will leave.

Jacobs added that Superdry appeared to be lost in terms of how it represents its brand to consumers, and suggested that it could possibly benefit from a rebrand.

“The issue appears to be one of brand perception, as well as online investment,” he said.

“Superdry appears to think of itself as a premium brand, which jars slightly with its customer experience and how it is actually perceived.

“As an indicator, just search ‘Superdry’ on Google. Under the ‘people also ask’ box, the top questions include ‘why is Superdry so expensive?’, ‘what does Superdry stand for?’, ‘why does Superdry use Japanese?’, and ‘is Superdry a luxury brand?’.

“Clearly, perception of the brand is unclear.”

A 16 per cent drop in overall sales over the peak retail period is alarming for any retailer due to tough trading conditions, but Superdry’s 9.3 per cent drop in online sales is possibly more alarming – especially in today’s online-driven context.

Even if Superdry discovered or relaunched its brand identity, it still faces the risk of lagging behind. And with overall retail spend falling, footfall declining and competition increasing, Superdry may face a hard road ahead. 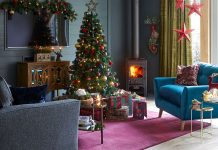 Hurr teams up with Depop to offer pre-rented styles