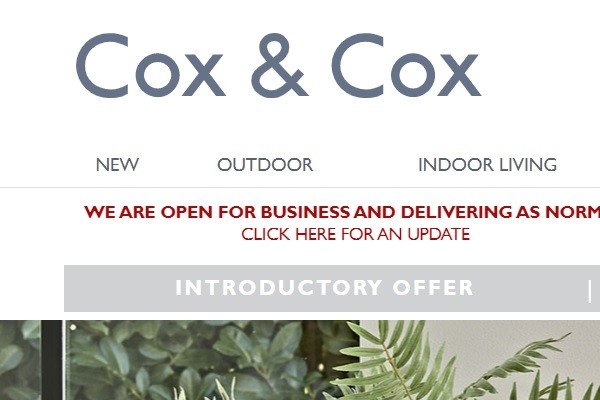 Cox & Cox has recorded strong half-year sales after it enjoyed a boost in its second quarter thanks to increased stock levels being able to meeting growing customer demand.

For its second quarter, the online furniture retailer saw sales surge 54 per cent year-on-year, after a 41.9 per cent uptick in order numbers.

For the year-to-date, Cox & Cox said sales more than doubled with a 105 per cent surge.

It added that furniture also remained a strong category, with sales up by 76.4 per cent year-on-year.

“The strategy of drip feeding newness on the website has worked well for Cox & Cox with new items being pushed out on a more regular basis,” Cox & Cox chief executive Richard Bell said.

“With the shift in the traditional Outdoor selling period here to stay, starting earlier in the year and running deep into autumn as customers embrace outdoor living.

“We continue to place stock orders to fulfil demand, extend the season and run some bestsellers all year. This has been well received by customers and we will continue with this strategy for SS22 for both furniture and key accessories including planting and water features.”

Cox & Cox said its customer database saw a 61 per cent increase compared to last year – most prominent in July, due to the end of season sale and an additional catalogue mailing
promo activity that helped drive a 25 per cent increase in overall conversion rate for the quarter.

“The website has only just gone live with AW21 and we’ve already sold our first Christmas tree. A good omen,” he said.