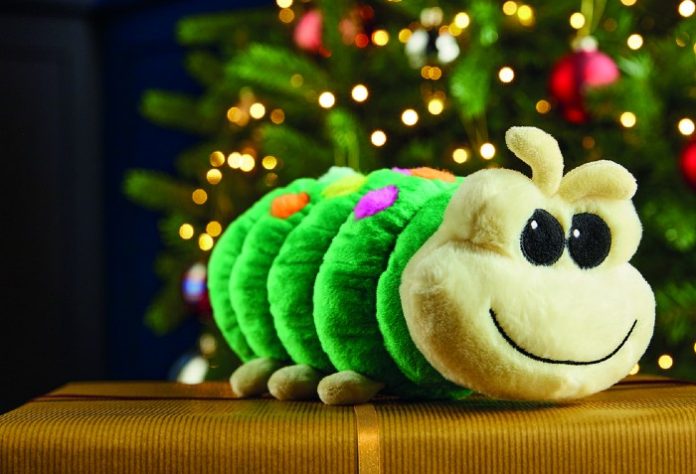 Aldi has launched a toy version of its Cuthbert The Caterpillar cake, following his appearance in the supermarket’s latest Christmas advert.

The German discounter’s plush toy range, which includes Kevin The Carrot and Marcus Radishford, has proved popular with customers in recent years.

Plush toys from the beloved Kevin the Carrot range appeared on Ebay or many times their retail price following their launch two years ago.

The Cuthbert the Caterpillar plush toy range is available for purchase in-stores only for £3.99 from November 25.

Aldi found itself embroiled in a lawsuit from Marks and Spencer earlier this year after a claim that its Cuthbert cake was similar to M&S’s famous Colin the Caterpillar cake.

M&S started legal action against Aldi in April to protect its Colin the Caterpillar cake with the claim that the Cuthbert the Caterpillar product infringes its trademark.

M&S lodged an intellectual property claim with the High Court and said it wants Aldi to remove the product from sale and agree not to sell anything similar in the future.

Despite this, Aldi’s social media team sent out tweets poking fun at M&S for the lawsuit.

This is not just any court case, this is… #FreeCuthbert

Hey @marksandspencer can Colin and Cuthbert be besties? We’re bringing back a limited edition Cuthbert and want to donate profits to cancer charities including your partners @macmillancancer & ours @teenagecancer. Let’s raise money for charity, not lawyers #caterpillarsforcancer.

M&S responded to Aldi’s charity idea and asked it to release a Kevin the Carrot cake instead – which received a lot of backlash from customers.

Aldi’s 2021 Christmas advert, which dropped earlier this month, introduced customers to Ebanana Scrooge in a retelling of the classic Charles Dickens novel “A Christmas Carol”.

While sleeping, Ebanana is visited by the Spirit of Christmas (Kevin the Carrot in pyjamas and a white beard) who takes him on a journey to discover the true meaning of Christmas.

Along the way, he spots footballer Marcus Rashford “who’s always helping children” – who appears as a radish called Marcus Radishford.

The story closes with the words: “The moral of the story? The answer you’ll find/For you to be happy/You must be kind”.

Aldi recently launched a festive campaign to donate 1.8 million meals to families who need help across the UK over the Christmas period.