Settled on the eastern side of the Mersey Estuary in north-west England, Liverpool holds great significance in the cultural history of the UK. As home of the Beatles, Liverpool also has the highest number of museums and galleries in the UK, attracting music fans and tourists alike.

The city also boasts one of Europe’s largest open-air shopping complexes, Liverpool One.

The centre, which was designed by 27 different architects, has over 170 shops and restaurants spread out over five shopping districts.

Since reopening in April, Liverpool One has seen its footfall levels reach 12.3 million visitors – just 8% short of 2019 levels.

Sales are currently 22% points ahead of UK retail averages and have been in growth since reopening (compared to 2019 figures).

Alison Clegg, managing director of asset management for Grosvenor, told Retail Gazette that Liverpool is a different retail environment to other places, saying: “People love to shop in this city”.

“It’s a pastime, it’s something that people do as entertainment. It’s not seen as a chore,” he said. “I feel really positive about the future.”

Finlayson witnessed more domestic visitors to Liverpool One during restrictions. He described Liverpool as a “weekend destination city”.

“Covid-19 presented the most difficult time of our lives,” he said. “During the tier 2 restrictions, we doubled our outside seating space due to pent-up demand.

“Our footfall towards the back end of the school summer holidays was hitting 2019 levels, which nowhere else in the country was seeing – Central London didn’t even have that many people.

“It was brilliant to see so many people out and returning to normal.”

Finlayson identified a “second stage of recovery” in Liverpool One, as restrictions change and ease.

“We have to appeal to that even wider tourist market,” he continued.”The tourist economy is worth £4.9 billion to the Liverpool City region. We have to re-establish that so much of that is overseas tourism.

“Pre-Covid, we were looking at marginal gains in footfall terms. There’s the Beatles Museum among other tourist attractions that attracts people to the city, primarily from overseas.”

Finlayson added that Liverpool One’s performance was excellent prior to the pandemic, but “in a really strange way” he feels more positive now because of the centre’s recovery levels.

“We’re seeing real loyalty and determination from the retailers that either want to reinvest or come here for the first time,” he said.

Since Debenhams went into administration, the department store’s unit in the centre has remained empty. Half of the store is expected to be occupied with leisure offerings due to high demand.

“Covid-19 presented the most difficult time of our lives”

Clegg said Liverpool One boasts a selection of international and independent retail in “a fantastic environment”.

According to Finlayson, Liverpool One helps bring retailers to life by giving them a place in which to thrive.

“Our management team helps to essentially create an environment that just allows them to maximise the potential that they have as retailers,” he said.

Clegg said the biggest challenge to retail nowadays is the rise of online shopping.

“It’s really important that we embrace the rise of online,” she told Retail Gazette. “We’re not just all about bricks-and-mortar. It’s a challenge we’ve overcome.

“We’re seeing the likes of JD Sports and Inditex actively taking on more space with us, so they’re clearly seeing the benefits of having physical retail.

“We collect turnover data from all our retailers,” she continued. “We’re in a fortunate position where we have a great idea of what’s happening with our retailers almost before they do, so we can see what our consumers want or don’t want.

“We are proactively looking to turn and churn retailers as the demand is there. We’re looking for the next new thing.”

“We also prefer to speak with our customers,” he said.

“We’re always researching. We want to give people what they want – the best retailers in the world,” he said. “We monitor the experiences given in store. We’ve now been working on that for four years.

“There is a direct link between the quality of service and performance.” 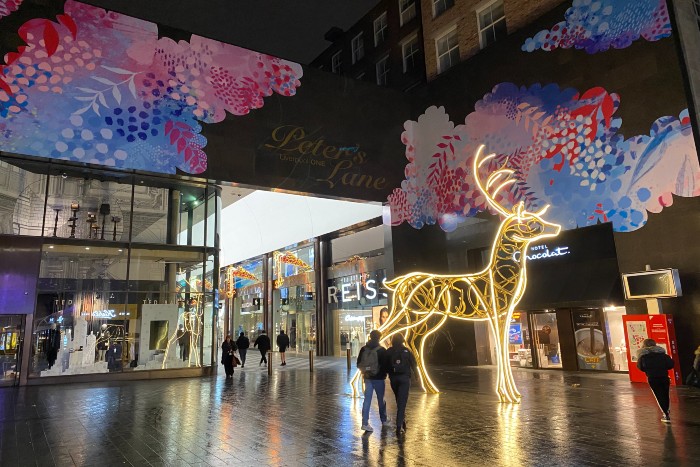 With the festive season well underway, Finlayson said he feels confident that the centre will experience days where it records 170,000 to 180,000 people again.

“We started working on Christmas in February,” he said.

“We looked at all the lessons we could learn from the previous Christmas. We know we’re going to see some extraordinary volumes in terms of footfall.

Clegg added that Liverpool One is seeking to return to 2019 levels and beyond.