High street bakery retailer Greggs has today reported a total sales increase of 4.5 per cent over the half year while like-for-like (LFL) sales slipped 2.3 per cent as expansion plans continued.

As a takeaway offering without an online presence, Greggs has been badly hit by wet weather and Kennedy McMeikan, Greggs CEO, noted the slump in consumer confidence also affected sales.

“The market remained challenging and was particularly impacted by the record levels of rainfall in the second quarter with UK High Street footfall down over 7 per cent,” he explained.

New shop openings remain a core part of the retailer‘s forward strategy, with 33 net new shops opened over the half period with a net 90 expected in total over the year.

Plans for new store formats are also under way as the baking specialist grows in popularity, thanks in part to its move to the media spotlight earlier this year as calls for an end to Government proposals of a “pasty tax” proved fruitful.{http://www.retailgazette.co.uk/articles/03411-sales-at-greggs-slip-in-the-wet-weather}

Four ‘Greggs moment‘ stores are now trading with a fifth opening later this week in Gateshead while refurbishment plans for over 100 shops are underway with 64 completed and performing strongly.

In line with this growth strategy, the retailer has announced the appointment of David Sheehan as Estates Director, who will join the retailer later in the year following eight years as Store Development Director with Sainsbury‘s.

Looking ahead, Greggs remains cautious and drew attention to the potential for further increases in global food ingredients costs, though believes it is well positioned to make progress in the months ahead.

“Conditions for consumers are likely to remain challenging in the second half and we will therefore continue our focus on delivering outstanding value for our customers,” McMeikan added.

“In addition we will make the Greggs brand more accessible to new customers through our shop opening programme and further development of our wholesaling and franchising channels.”

While the results are below the expectations of some investors and analysts, Darren Shirley at analyst firm Shore Capital believes that Greggs is performing well given current consumer constraints.

“We view the results as resilient given the backdrop of further slowing consumer spending and unprecedented wet weather, which materially reduced high street footfall through much of Q2,” Shirley commented.

“Whilst not immune to the ongoing consumer constraints and the inclement weather, we reiterate our buy recommendation post today‘s update, reflecting the medium to long-term store growth potential that remains in the UK…the exciting progress in wholesale, the margin expansion potential from the ongoing investment in manufacturing infrastructure, the strong cash generation and balance sheet strength.

“Greggs remains our only positive recommendation in UK Food Retail.” 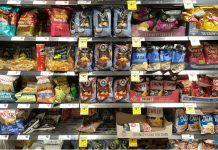 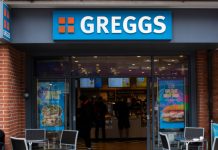 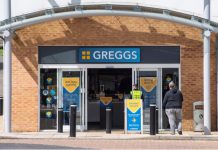 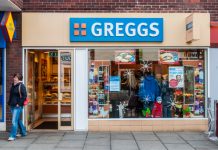