The UK toy market is hoping that girls will help drive sales of children‘s products in the run-up to Christmas, according to new data.

Market research company The NPD Group found in figures for DreamToys, the official toys and games Christmas Preview held in London last month, that girls aged seven to 10 years old are the most dynamic target as UK sales to this group jumped 19 per cent in the 12 months ending June 2012 to £330 million.

‘On request‘ sales by girls across all age groups have risen 11 per cent over the same period while for boys, such sales have grown by just one per cent.

Dolls, which remain a core category for young girls, have seen a 17 per cent boost to sales in the year-to-date through September 2012 and modern offerings such as Mattel‘s Monster High help explain the sudden growth

Jez Fraser-Hook, UK Executive Director of NPD Toys, Nursery and License, told Retail Gazette: “I think we always tend to see traditional toys generally always have their place and we have seen that this is the case over the last few years with girls getting older younger and preferring to buy CDs or make up rather than toys.

“The small innovation in toys for girls in the last year to 18 months has really grasped young girls‘ attention, particularly the slightly older age group.”

Re-released in August this year following significant success in the late 90s, the Furby has been re-imagined as a as a mobile app which selects food for the toy and translates its words into English.

Fraser-Hook explained: “I think digitally enhanced products enhance an element to the toy as so many children who have access to smartphones and tablets so any toy that has the capability of crossing over to have play value with the technical side will do well.

“Furby does that beautifully in terms of the affability of the play along with the digital element; that again attracts the older girls, and boys to an extent, for a bit longer.

“I think there a lot more openness now to the fact that there are so many more products on the market and more people with an iPad or tablet of some sort; there is a level of acceptance that that is the way the market is going.

“The traditional toys still play a massive part in the toy market and will always be there but I think innovation in certain areas is an additional to the toy market that does really well and grasps the attention of consumers.”

The battle of the sexes continues in the market as the spend gap between girls and boys aged seven to 10 shrunk in the first six months of the year to 10 per cent, a considerable change as the gap was double the current figure in 2008.

Looking ahead, the fast-evolving demands of tech-savvy youngsters are set to affect the market and Fraser-Hook noted that there were a number of enhanced products showcased at this year‘s Toy Fair.

He said: “In the coming year, I think retail will still be challenging and I believe that this year we will see flat toy sales or a slight increase but next year I wouldn‘t be surprised if we saw the same with a little bit of growth in the market.

“Going into next year will be the real telling story as to how app toys will do and whether there‘s a place for them.

“I think we‘ll find that there‘s a handful if not a few more that do really well and stay on the market and there will be a continual place for them, but that won‘t take anything away from more traditional toys.” 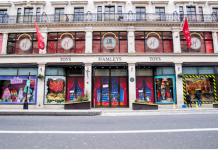