Job adverts in the luxury sector have surged by 235 per cent year-on-year on leading job board RetailChoice.com.

Its Retail Employment Insight Report, which analysed over 25,000 job adverts placed on Retail Choice website between July and December 2013, found that 14 candidates were applying for each luxury role in Manchester as job ads in the luxury sector now make up 5 per cent of all jobs advertised.

The demand for luxury roles has been attributed to the “lipstick effect” during the recession as people chose to spend lots of money on certain items and save money on others, eg: shopping in discounted supermarkets but still opting to buy a designer handbag. Luxury retailers have also benefited from a spate of foreign buyers from China, Qatar, Russia and Nigeria.

The report found that luxury retailers are looking for brand ambassadors who can assist consumers and speak multiple languages.

However, the number of UK retail jobs is still down 56 per cent on 2007 levels.

Meanwhile the young and “continually evolving” e-commerce job market will grow as the public‘s appetite for online shopping rises. The demand for online roles has surged from around 700 jobs posted in 2009 to 1,500+ this year while high-street roles have fell to 50,000 from a 200,000 peak six years ago. Skills of combining technical know-how and working across multiple teams is set to be an employment trend in coming years, says IMRG ‘Mind the Gap?‘ report.

Neil Brodie, Sales Director at RetailChoice.com said trends such as click and collect and supermarkets opening convenience stores will be key in keeping the high street from shrinking. He expects e-commerce salaries will go “up and up and up” as e-commerce specialists are recruited. “It will become about retention,” he added. 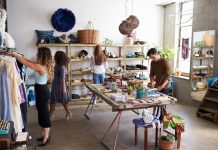