First-quarter growth was 8%, down slightly from the 11% growth in the previous three months offset by weaker demand in Asia, the company said this morning.

Sales in Hong Kong and mainland China were weak while Europe and America saw fared better.  In a statement Burberry said that Japan had seen “exceptional growth, albeit off a small base”.

“While mindful that the external environment remains challenging, we will continue to focus on growth opportunities across channels, regions and products, with exciting plans for the year ahead” said Chief Exec Christopher Bailey.

The fashion and accessories retailer reported revenue in the three months to June 30 up 8% to £407m, below analysts‘ average forecasts.

Commenting on Burberry‘s performance, Will Hedden, a dealer at London Capital Group, said:

“One of Britain‘s flagship brands-abroad, the luxury fashion house is seeing a slowdown in growth as the year goes on. The underlying performance reads well, but the concern over a sharp fall in activity in Hong Kong and lacklustre growth on the Chinese mainland will worry investors that other signs of a slowdown in the region are now being exhibited in one of their favoured imports. Shares peaked in the first quarter and have struggled to show sustained resistance on the way down since. Full year performance will be impacted by how the brand deals with volatile currency movements.” 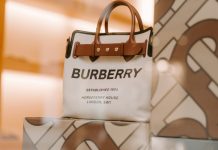 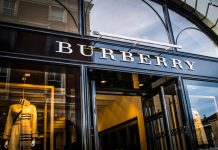