Next time you pop by the iconic Selfridges store on London‘s Oxford St, it might not be for the usual reason to shop.

Indeed, it may be because you’re about to watch a theatrical production in a 122-seat auditorium on the lower ground floor of the department store.

You read that right: Selfridges has opened the doors to what it believes is the first ever fully-fledged theatre within a department store – all in the name of commemorating the 400th anniversary of William Shakespeare‘s death.

For a limited five-week run, shoppers and theatre-goers alike have the chance to see a contemporary production of Much Ado About Nothing.

The production features five pre-recorded “digital cameos” from actors Simon Callow and Meera Syal which will be projected into the space as news reports and CCTV footage as part of the 21st century refashioning of the production.

“This play offers a world in which fashion, appearance and social standing are of paramount importance and rumour, gossip and insinuation can be lethal,” director Mark Leipacher said.

“Everyone at The Faction is delighted to be collaborating with Selfridges to create this new production for the Shakespeare Refashioned project. It’s an ambitious, innovative and wild idea – exactly the way we should be celebrating Shakespeare 400.”

The pop-up in-store theatre is part of Selfridges’ Shakespeare Refashioned campaign, which is fusing fashion and drama on its storefront windows as a tribute to the English-language world‘s greatest playwright.

It is also a collaboration with theatre company The Faction, and also allows shoppers access and interaction with the process of putting together a Shakespeare play. 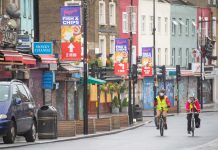