The parent company of Superdry has announced plans to launch a chain of sportswear stores as it released the full details of its annual financial report.

As part of plans to take advantage of the lucrative fitness market, SuperGroup will debut its standalone Superdry Sport in Grenoble, France, in October.

Another four Superdry Sport will open by Christmas before a wider roll out of the fascia next year.

SuperGroup made the announcement alongside the release of its full-year results, which saw the company record a 53.1 per cent rise in pre-tax profits to £84.8 million for the 52 weeks to April 29.

Like-for-like retail sales also grew by 12.7 per cent and underlying profit before income tax was up 18.4 per cent to £87 million, compared to £73 million recorded last year.

SuperGroup enjoyed growth in sales in all of its global markets, too. In the UK, revenues increased to £319.2 million, European sales grew to £332.9 million, while in the rest of the world it grew to £99.9 million.

During the year, SuperGroup opened 80 new Superdry stores, bringing its worldwide total to 555. This includes seven new stores in the US and eight stores in China.

“SuperGroup has made further significant progress this year, delivering growth in sales, profit and the ordinary dividend as we maintained momentum against all elements of our strategy,” chief executive Euan Sutherland said.

“Our focus on delivering long-term sustainable growth continues, through a multichannel approach that balances a disciplined owned and franchised store-opening programme with further development of our re-engineered wholesale channel and strong ecommerce proposition.

“Investment in infrastructure is underpinning our global growth plans and creating future leverage opportunities, while ongoing product innovation, and new social and digital marketing campaigns are introducing new customers to the Superdry brand.”

In an interview with Press Association, Sutherland said he has not seen any slowdown in consumer confidence in the UK since the Brexit referendum a year ago.

“The Brexit vote and fluctuating exchange rates have had the most significant direct impact,” he said.

“The Superdry brand has proved resilient while the increased exposure of the business to different countries, markets and currencies has been important in providing some insulation from that impact.”

SuperGroup’s full results were released earlier than planned due to “a random theft from an employee” last week that saw a draft version of its preliminary results leaked to an external party. 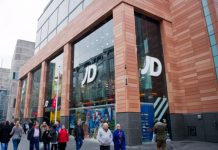