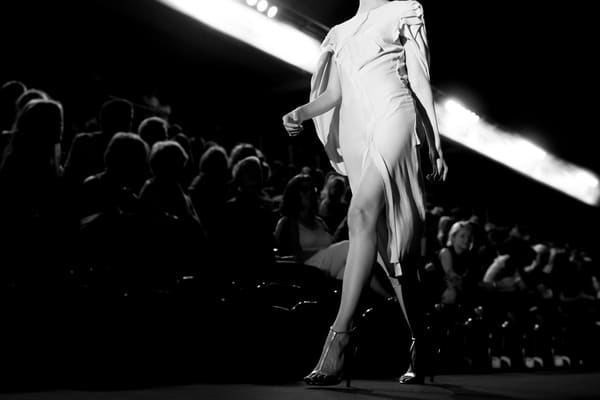 “British fashion is of huge importance to our country, contributing £28 billion to the UK economy and supporting nearly 900,000 jobs,” Prime Minister Theresa May assured her guests at 10 Downing Street.

Despite May‘s championing of the British fashion industry to kick off London Fashion Week (LFW) last year, her short speech was shrouded with a less optimistic sentiment.

Brexit had just landed, a move that was almost unanimously opposed among her esteemed fashion guests.

The event was positioned to be a shining example of how the UK fashion industry could thrive post-Brexit, and big hitters like London Mayor Sadiq Khan and British Fashion Council chief executive Caroline Rush went along with this.

“Fashion Weeks are about demonstrating creative leadership, innovation, creating debate, which is crucial to everything from attracting future talent to partnerships and collaborations.”

As this year‘s LFW kicks off, this optimism seems to have waned.

With the eyes of the fashion world descending on the heart of the British fashion industry this week, could this be the kickstart it needs to prove May right?

The industry certainly retains financial potential, contributing tens of billions of pounds to the UK‘s gross domestic product each year.

“Fashion represents a major wealth creator for the UK, with a  direct contribution of £28 billion  to the UK economy from the UK fashion industry, and  £12.4billion  spent on fashion online in the UK in 2015,” Interbrand‘s global director and co-author of Meta-luxury Rebecca Robins told the Retail Gazette.

“And fashion weeks catalyse a wider ecosystem of businesses, from beauty to entertainment, from hospitality to travel.”

Although high street retailers have a significant presence at LFW, eyes tend to stay firmly fixed on the luxury labels.

Luxury retail has been the standout performer in the fashion sector since Brexit, seeing swathes of tourists flocking to cash in on the favourable exchange rates. Robins said the sector was also poised to cash in on LFW.

“Brands are related to culture and nowhere is that more manifest than in luxury and fashion,” she explained.

“London is a powerful destination brand and LFW is a stage on which to showcase our creative excellence and innovation to the world.

“Fashion weeks are about demonstrating creative leadership, innovation, creating debate, which is crucial to everything from attracting future talent to partnerships and collaborations.

“Fashion weeks are ecosystems that thrive – or not – on the brands that are part of that ecosystem.  You only have to look to the commentary around NYFW and the debate around the impact of the exodus of home-grown designers.”

Further than displaying just “creative leadership”, the industry has the opportunity to demonstrate its leadership in areas like ethics and sustainability. For LFW to inspire confidence from investors and customers to reinvigorate the British industry, a commitment to outstanding standards while under the microscope is essential.

Last week, the Competition Markets Authority (CMA) issued and open letter to businesses in the run up to LFW that urged them to “be clear on the boundaries of the law”.

This follows a high-profile £1.5 million fine in which numerous fashion businesses were found to be colluding on price. As the Chartered Institute of Marketing‘s chief executive Chris Daly explained, this is not the start the industry was looking for.

“Even if LFW can nudge this total closer to £300 million this year, it will be in the context of a UK clothing and footwear market that we estimate will be worth £63.5 billion this year.”

“The fragile trust of consumers will have been damaged by the CMA‘s warning about price collusion, issued on Tuesday,” he told the Retail Gazette.

“The warning is not the first of its kind: modelling agencies were fined over Christmas, sparking doubts about the reliability of pricing in the sector in general.

“A commitment to ethical marketing means more than simply doing no harm; it requires firms to act as a force for good in everything they do. The eyes of the fashion world are focused on London this week, and Britain‘s fashion industry is a beacon of best practice.

“It is a golden goose that will be cooked without consumer trust.”

Regardless of what brands have in store for the 105,000-plus attendees expected to attend the event, it will produce hundreds of millions of pounds.

Last year an estimated £279 million was generated by LFW, and this year it is expected to be nudging closer to the £300 million mark.

This sounds like an impressive number, but for the likes of struggling retailers like New Look, this is but a blip in compared to its £1.2 billion debt.

“Even if LFW can nudge this total closer to £300 million this year, it will be in the context of a UK clothing and footwear market that we estimate will be worth £63.5 billion this year,” Mercer told Retail Gazette.

“We are sceptical that LFW will inject growth where it is most needed: in midmarket fashion retail.

“The middle ground remains the toughest segment in fashion retail, as shoppers—spoilt for choice—continue to drift away to online-only retailers, value players and lifestyle brands.

“We don‘t see LFW as offering any solution to this structural challenge.”