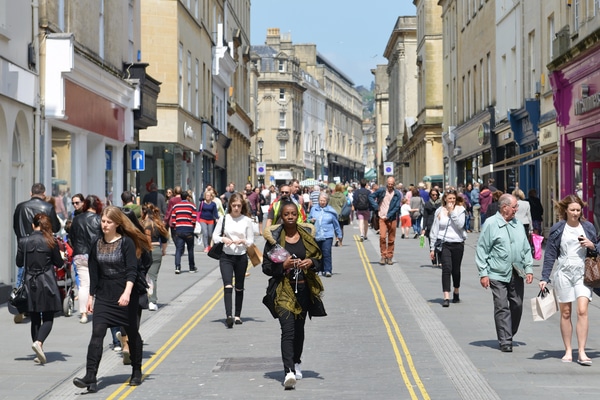 Footfall across the UK continued to fall in August as experts warn an “urgent effort is required from policymakers” to stem the decline.

According to new data from the British Retail Consortium (BRC) and Springboard, overall footfall fell 1.2 per cent compared to the same period last year, over three times the average quarterly decline and over four times the average 12-month drop.

High streets saw the most significant drop in shopper numbers falling 2.6 per cent, a steeper decline than July‘s 2.1 per cent.

Conversely, retail parks continued to see a growth in footfall, seeing a 1.6 per cent boost in August. This followed a similar 1.7 per cent climb a month earlier.

London saw the steepest drop in footfall behind Northern Ireland, seeing a two per cent decline and 2.3 per cent decline respectively. This marks the second consecutive month of decline for the capital.

“At least part of the reason for more subdued footfall was a rise in online activity, in terms of both value and volume,” Springboard insight director Diane Wehrle said.

“Online sales rose by 11 per cent, the greatest rise this year and significantly up on the 6.2 per cent last August and the 8.3 per cent in July.

“In part the rise in online activity will have been a result of much cooler, rainy weather this August than in 2016 which undoubtedly discouraged some shopping trips.”

BRC chief executive Helen Dickinson added: “A far more concerted and urgent effort is required from policymakers to stem and ultimately reduce the cost of doing business, particularly in our more economically-fragile communities.

“Not applying the planned inflationary increase to business rates next April would be a place to start.”