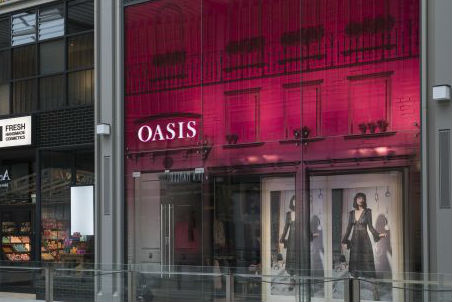 An uptick in sales and profit at womenswear retailer Oasis has allowed its parent company, which also owns Coast and Warehouse, to record a rise in like-for-like sales.

Online sales on its own spiked 17.5 per cent, and this comprised 21 per cent of total sales.

Meanwhile, Coast sales had a 5.6 per cent uptick to £85.2 million in the same fiscal year, and EBITDA was £3.4 million against a break even last year.

Online sales were up 12.1 per cent, representing 30 per cent of total sales.

However, Warehouse’s sales slumped 12.9 per cent to £110 million with an EBITDA loss of £5.8 million due to investment into the brand last year to relaunch it and structure the business for future growth.

Oasis, Coast and Warehouse are all part of the Aurora Fashion Group – which is majority-owned by the administrators of now-defunct Icelandic bank Kaupthing.

Aurora’s financial year for its brands combined saw a 4.9 per cent rise in like-for-like sales as well as an 18.5 per cent spike in ecommerce sales.

Kaupthing had placed the three retail chains up for sale a year ago, and after fielding expressions of interests, last month it decided to abandon the sale after the only remaining bidder was private equity firm Emerisque Brands.