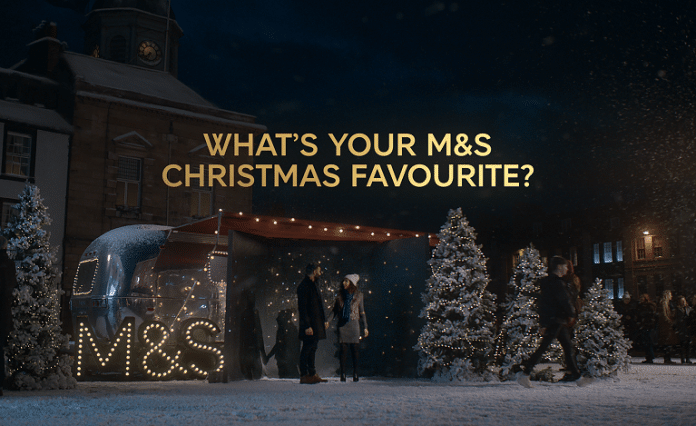 Marks & Spencer has just unveiled the first of its two Christmas adverts amid a surge in retailers launching their festive campaigns this week.

In a first for M&S, the bellwether retailer is running two separate Christmas campaigns – one for its food division and one for its clothing and home division.

The first campaign sees M&S Food brought to life through a series of unscripted adverts that place colleagues and customers front and centre.

M&S said its creative team travelled around the UK to find real people to star in the adverts and talk about their M&S food favourites and why they make Christmas special.

The campaign comprises of 12 different adverts and stars more than 60 customers and colleagues.

Each ad encourages viewers to join the conversation on social media by sharing their Christmas food favourites using the hashtag #MyMarksFave.

This year, we’ve travelled the length and the breadth of the country to ask the nation what their M&S Christmas Favourite is. What’s your favourite M&S food? Join the conversation using #MyMarksFave

Posted by Marks and Spencer on Wednesday, 7 November 2018

The hashtag also features its own festive Percy Pig emoji each time someone uses it on Twitter, and M&S will soon launch Percy Pig GIFs on Instagram stories as well as add Percy to festive snaps.

M&S added that its monthly social-first Instagram series What’s New at M&S will get a festive makeover as part of its Christmas campaign, with two special episodes slated to go live on November 15 and December 14.

The #MyMarksFave campaign was developed by M&S food marketing director Sharry Cramond and her team under the leadership of M&S Food managing director Stuart Machin.

“As our customers and colleagues love our food so much, we thought we would let them tell the story in their own words,” Cramond said.

“We spoke to customers and colleagues up and down the country about their favourites from our festive range, and then we simply made that the ads.

She added: “People talk about their favourite M&S Food throughput the year and we are looking forward to hearing our customers #MyMarksFave this Christmas.”

M&S is expected to reveal the details of its separate clothing and home campaign later today, although the accompanying TV advert is not slated to be released until early next week.

M&S’s Christmas campaign comes amid a turbulent time for the retailer, and for UK retail as a whole.

Debenhams was the first major department store to launch a TV campaign for the Christmas season, while Tesco was one of the first of the Big 4 grocers to launch theirs and discount grocer Aldi brought back much-loved Kevin the Carrot for its 2018 campaign.

However, all eyes are now on Sainsbury’s and John Lewis for their annual and much-hyped adverts, especially the latter.

Meanwhile, Harvey Nichols has partnered with Disney to transformed its flagship Knightsbridge store into an “extraordinary wonderland” for Christmas, to coincide with the release of Mary Poppins Returns.