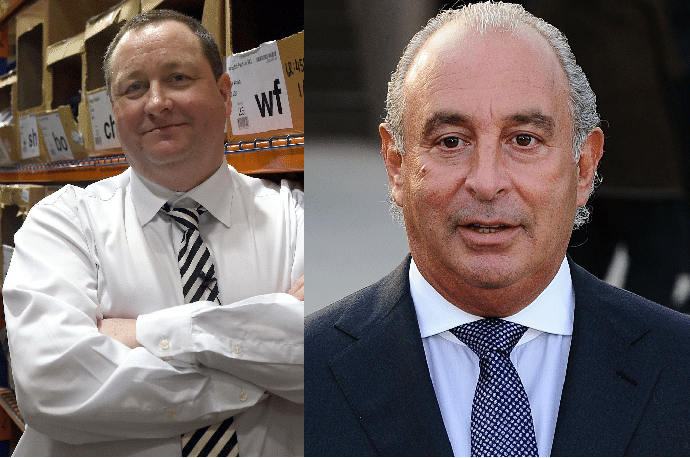 // The two retail tycoons used to be friends

Mike Ashley has lashed out at Sir Philip Green, insisting he wouldn’t buy his Arcadia retail empire even “for a pound”.

Speaking to The Times, the Sports Direct tycoon quashed speculation that he was mulling an acquisition of Arcadia Group or considering a partnership with Leonard Green & Partners – the private equity firm that has a 25 per cent in Topshop.

Ashley said he would not even buy Green’s vast empire – which owns Topshop, Dorothy Perkins, Burton, Evans, Wallis and Miss Selfridge – for £1.

“Let me be completely clear. I wouldn’t buy any part of Arcadia either with Leonard Green or directly for a pound,” Ashley told The Times.

Arcadia is a major supplier to Debenhams, of which Sports Direct is its biggest shareholder with a 29.7 per cent stake.

For the past few months tensions have been rife between Sports Direct and Debenhams, where a series of poor trading updates and profit warnings from the latter prompted Ashley to launch a campaign to remove the department store’s board and install himself as an executive director.

The Times said Ashley and Green’s previous friendship had been “strained” by the drama at Debenhams.

“I am not getting involved with that pension deficit in Arcadia for reputational reasons. It is not for me,” Ashley told The Times.

“I don’t know where the story is coming from — for all I know Philip is putting it out there that I am going to buy [Arcadia Group] — but I am not interested.”

The news comes amid speculation that Green is preparing to launch a restructure of Arcadia, potentially in the form of a CVA.

CBRE and JLL, two of the biggest retail property agencies in the UK, have already made it clear that they would not assist Arcadia should that CVA eventuate.

A CVA would involve a raft of store closures and rend reductions, resulting in job losses, but this would need approval from creditors such as landlords and the Pension Protection Fund.

A spokesman from Arcadia Group last week confirmed that the company was in the process of “exploring options” but denied it would lead to a significant number of store closures or job losses. There was no mention of a CVA.