Fat Face has appointed Drapers’ editor to take up a new marketing and communications director role.

Keely Stocker will join the lifetsyle and fashion retailer later this month.

She was promoted to online editor in February 2009, before being named as editor in October 2015.

Stocker said she was “hugely excited” to start a new chapter in her career.

“Fat Face has a brilliant team, and I’m looking forward to getting started,” she said.

In June, design director Emma Shaw resigned from her role after eight years. 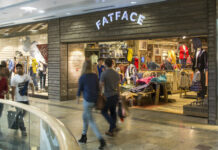