Tapestry has announced that Coach chief executive and brand president Joshua Schulman will step down from his role.

Meanwhile, Tapestry chairman and chief executive Jide Zeitlin has committed to leading the group for the next three years.

Schulman had joined Coach in his newly-created role of brand president back in 2017.

At the time, Coach announced that the former Coach global marketing president for North America, Andre Cohen, would be departing.

Tapestry, which owns Coach and Kate Spade among others, said Schulman will depart the organisation after a transition period.

Before joining Coach, Schulman was the chief executive of Jimmy Choo since 2007, as well as the managing director, international strategic alliances and senior vice president of Gap.

During the search for his successor, Zeitlin will have direct oversight of Coach’s strategy and operations, working closely with the brand’s senior leadership team.

“Since becoming chief executive, I have had the opportunity to immerse myself in the company, including leading an in-depth review of the brands and businesses,” Zeitlin said.

“The review revealed attractive growth opportunities for Coach, Kate Spade and Stuart Weitzman, which we will unlock by further leveraging each brand’s differentiated positioning and strong consumer connections, powered by a modern, agile Tapestry platform.

“I will continue to work with our world-class teams to sharpen our focus on execution while driving our evolution to being a truly consumer-centric and data-driven organisation, which will ensure we deliver on the full potential of our entire portfolio and enhance returns for all stakeholders.” 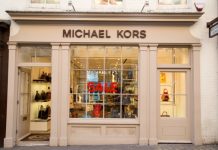