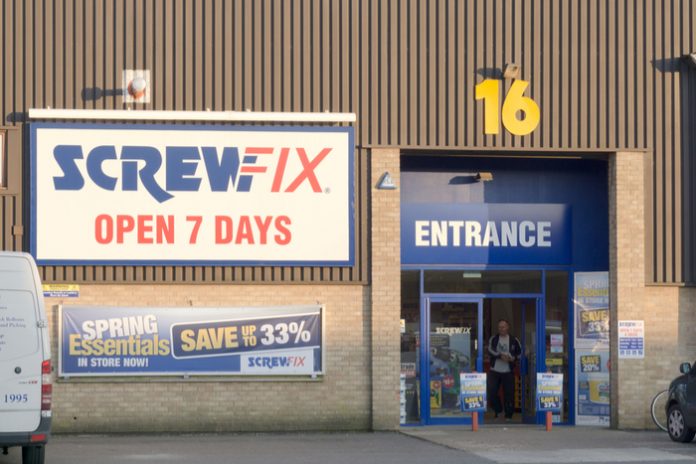 // Screwfix reaches £2bn in annual sales for the first time

// Screwfix opened its first store 15 years ago, and had only hit the £1bn mark 5 years ago

Screwfix has hit the £2 billion milestone in annual sales for the first time – 15 years after it opened its first shop and despite the pandemic wreaking havoc on the high street.

The milestone was achieved for the year to January 2021, during which Screwfix also opened 30 new stores – taking its total number of stores across the UK and Ireland to 725.

The news comes after the fourth quarter trading update of parent company Kingfisher, published earlier this month, included a forecast that Screwfix would hit £2 billion in sales for the financial year.

Screwfix has enjoyed the benefits of being classed as an “essential” retailer in the UK, meaning it has been able to keep its shops open throughout the pandemic, even during lockdowns.

The retailer has also reaped the rewards of people undertaking home renovations due to prolonged stay-at-home orders.

Screwfix said its new stores have brought the business closer to its tradespeople, “many of whom have played a crucial role in keeping homes warm, safe and with power throughout these difficult times”.

The retailer added that its growth has led to a significant recruitment drive, including over 1000 new staff aged under 24.

Screwfix said the overall growth brings the number of new jobs created in the past five years to 4000, during which time it has opened, on average, a new store every week and doubled annual sales from £1 billion to £2 billion.

In addition to recruitment, Screwfix more than 800 staff have been promoted internally, including many who have completed apprenticeships this year.

Meanwhile, the Screwfix Foundation raised £2 million during the financial year, supporting over 400 charities and not-for-profit organisations to help fix, repair, maintain and improve their facilities for people in need across the UK.

“We have continued to keep our customers supplied safely whilst creating opportunities for our colleagues.

“We have also been able to give back to our communities when they have needed support the most.

“I’d like to thank all of our colleagues and customers for their incredible support during what has been an extremely challenging year.”