Opening its doors to Brits on Canada Day, chief commercial officer Kevin Hydes is expecting a raft of patriotic Canadian expats to flock to the new shop.

However, Tim Hortons’ appeal will go beyond those from The Great White North. The fast food specialist, which has been described as ‘McDonalds meets Starbucks’, has a cult following globally that Hydes is confident will draw in Londoners to its new outpost.

“People have a very emotional connection with the brand,” he says. “There is a bit of a cult following for Tim Hortons. The people that know us love Tims.”

In fact, some superfans queued for more than 36 hours to be the first in line when the London branch opened on Friday. 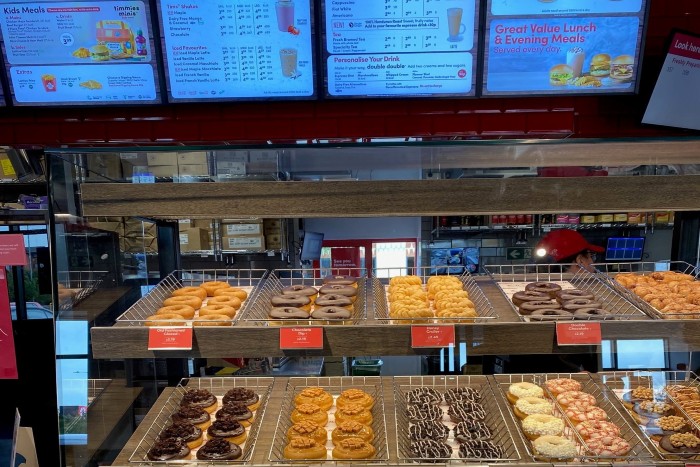 The anticipation has been growing for some time for Tim Hortons London opening.

It has waited five years – it opened its first UK store in Glasgow in 2017 – and opened 55 UK stores in cities such as Birmingham and Manchester before making its mark in the capital.

Hydes says Tim Hortons has purposefully taken its time to make sure it gets its London launch right as it sought out a site that appealed to its core customer base – families, students and commuters.

The Park Royal restaurant fits that bill. The branch at the Royale Leisure Park, which is anchored by a newly-refurbished Odeon cinema, seats 130 diners and has a drive-thru service. It sells burgers, hot dogs, toasted melts, wraps, fries, donuts, coffee, frappes and juices.

Park Royal is just the start for Tim Hortons in London as Hydes is focused on growing its coverage in the capital rapidly.

“We haven’t come to London to open just one site, we’ve come to open many and we’ve got a number of sites in the pipeline that I hope will come to fruition,” he says. “We want to be a meaningful force in London.”

Hydes joined Tim Hortons in 2017 after spending 17 years at Costa-owner Whitbread. As international and brand development brand for Costa he knows how to scale food and beverage businesses.

“When I left Costa, we has sold about 2,200 retail outlets, and many thousands of distribution points. And when I joined Tim Hortons, we had zero,” he laughs.

“Tim Hortons was really kind of a start up, despite the fact that we had the right to develop the brand from Canada.”

His task was to make sure that Tim Hortons found a model to scale profitability.

London posed a particular challenge because of the high rents and rates in the capital. “We had to be really mindful of that, particularly in the early point of the development of the brand,” says Hydes.

Luckily for him, he has found that Tim Hortons’ sweet spot is not city centre locations like Oxford Street or Piccadilly.

After trialling locations such as office and student areas, Hydes found that the drive-thru model works best for Tim Hortons and helps it stand out from rivals such as Costa, Greggs and Pret, which have a large portion of their estate in high street locations.

“The problem is that the period of development for a drive through is roughly between 18 months and two years from the moment that we select a site to opening a site.

“So, we’ve been really selective about our sites. We’re looking for long term sustainability and a profitable business. We’re not here for a vanity project.”

“We’re building drive-thrus in communities where we know we’re serving families and commuters.”

However, Hydes is confident that Tim Hortons’ offer can extend to other retail environments and he is testing travel and roadside locations.

Now that Hydes has found the right model for Tim Hortons, the Canadian brand is pushing ahead with expansion in the UK.

Hydes plans to open at least 30 new restaurants this year and is aiming to double that next year.

His ambition is to make Tim Hortons a household name in the UK over the next five years.

It has already been in the UK for five years, of course, however the pandemic did scupper its expansion plans over that period.

However, Hydes says Covid-19 has created opportunities for Tim Hortons.

“Covid has created a whole new audience – loads of commuters and people who prefer to shop from a distance – and that’s another reason why our drive-thrus are performing so well,” he says.

As normality resumes, expect Tim Hortons to push ahead with its expansion as it aims to further grow its cult following and put Canadian food on the map.