Shirt and workwear retailer TM Lewin has reported encouraging sales and profits growth for the year to February 26th 2011, with annual revenues surpassing £100 million for the first time ever.

The company, which now has 87 stores and 13 concessions in the UK, as well as seven franchise outlets in Singapore and Malaysia, saw sales rise 20 per cent year-on-year to £100.38 million and EBITDA grow five per cent to £14.7 million during the 12-month period.

A statement released by the business today revealed that there are grand plans to expand the company‘s international presence in the next five years, with the management targeting sales of £88 million from operations outside the UK by 2016.

“Building on our already successful international platform in the US, Europe, Africa, Singapore and Malaysia, further expansion will be led by a drive into south-east Asia and Australia with a flagship store located in Sydney,” the company said.

Growth is expected to be achieved through franchising opportunities and the development of the company‘s international multichannel platform.

In order to support this expansion strategy, Mark Dunhill was brought in as International Director in January, Andy McQuin arrived as Marketing Director in September and Matt Hudson will assume the role of Merchandise & Buying Director next February.

Geoff Quinn, CEO of TM Lewin, said the last year has been an “exciting time” for the business.

“Despite some very real challenges in the UK, we broke the £100 million sales level for the first time in our history and our successful store expansion programme has taken our portfolio worldwide to 107,” he explained.

“If the past was frenetic, the future will be even more so. We have finalised a three-pronged strategy for our medium-term development: maintain and build on our outstanding leading market position in the UK; build our international business over the next four years with sales equivalent to the UK‘s today; and, build out a fully integrated multichannel sales platform to ensure we optimise the opportunities across all our markets.”

Menswear is still the largest part of the TM Lewin business, with 86 per cent of all revenues coming through these ranges. 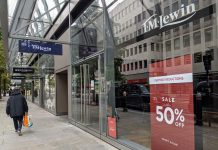