Italian hosiery & beachwear retail group Calzedonia has announced that it will open its very first store in the UK near to St Paul‘s Cathedral in the City of London next year.

A ten-year lease has been signed by the retailer for the 1,300 sq ft unit on Cheapside, which will be fully converted and ready to open by early next year.

Founded close to Verona in 1987, Calzedonia runs over 1,300 outlets across Europe, the Middle East & central America, and hired real estate consultancy Cushman & Wakefield to locate five locations across London that could house one of its stores.

Duncan Gillard, part of the Central London Retail Team at Cushman & Wakefield, said: “The acquisition is a sign of improving retailer demand for the City of London, aided by the opening of Land Securities‘ One New Change Shopping Centre, directly opposite 139 Cheapside.”

One New Change opened in the financial district of London in October last year and has since significantly boosted trading in the area.

Although the City was built on market trading, a vibrant shopping offer had been missing in the area of Cheapside for many decades, but now footfall is rising and last weekend the Cheapside Traffic Free Christmas Shopping Day saw the streets around the centre pedestrianised and the Royal Exchange and Leadenhall centres open for the first time ever on a Saturday.

Calzedonia, which owns the brands Intimissimi, Tezenis and Falconeri, is a major national company in Italy with supermodels such as Gisele Bundchen modelling its clothing ranges, and now it hopes to expand into the UK market.

After opening its initial five stores across the capital, the retailer, which sells socks and other items for men, women and children, hopes to roll-out across the country like many other foreign retailers.

In September Cushman & Wakefield advised Spanish fashion brand Bimba & Lola on the leasing of its first UK store, located at Westfield London, and in April the real estate firm provided the same service as French retailer The Kooples secured its fifth outlet in the capital. 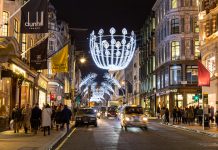