Owned by private equity firm Lion Capital, the retailer was focused on expansion until recently, unveiling an upsized version of its Lakeside store in August as it sought to compete with Boux Avenue, created by Theo Paphitis who sold his equity stake in La Senza in 2006 for a reported £100 million.

It seems however, that the lingerie specialist is the latest victim of the financial trouble sweeping the high street, after shoe retailer Barratts announced that it has fallen into administration last week.

Retail Gazette understands that while several options including rebranding and the selling of assets are being considered, Lion Capital is not discounting administration for the retailer.

“This is a sign of the times and shows that everyone has to run their businesses as efficiently as possible,” she told Retail Gazette.

“In terms of lingerie specialists, clothing retailers offer lingerie now and the high levels of discounting in high streets means that specialists must focus on promotions too.”

Experts have previously warned that many companies may struggle to make rent payments due at the end of this month, and Helen Dickinson, head of retail at KPMG explained that, while the slowing of inflation is positive news for retailers and shoppers, troubling times are expected in the New Year.

“If you scratch beneath the surface, retailers‘ margins continue to shrink as unwilling consumers refuse to pay full price for anything,” she explained.

It seems that La Senza has bowed to competition from other high street retailers, as Boux Avenue continues to expand and recently opened a new store in Guildford‘s refurbished Friary Centre ahead of the Christmas rush.

Peters argues that there is a strong risk for all retailers during this crucial festive period.

“Retailers will be focused on clearing stock over the Christmas period in order to ensure that it is not carried over through to next year,” she said.

“January will be a very difficult time; sales will drive footfall but once these die down there will be a pretty quiet time, so retailers must get the most out of Christmas.” 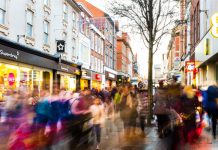 How will retailers trade through Black Friday amidst the pandemic?