Online fashion retailer Asos has today reported a 31 per cent year-on-year rise in retail sales to £137 million for the three months to June 30th 2012.

UK sales rose eight per cent over the period, accounting for 35 per cent of total sales, a strong result considering that UK retail sales have slowed in recent months as its domestic market presence matures.

Simon Chinn, Lead Consultant at analyst firm Conlumino, commented: “Asos‘ more robust performance in the UK over this period compared to the previous quarter, where sales were up 4 per cent would have been in part helped by the boost in retail spending around the Queen‘s Jubilee holiday.

“Furthermore while the adverse weather conditions have dampened prospects for some clothing retailers, Asos has been in a position to capitalise on weaker footfall on high streets as consumers opt for the convenience and comfort of shopping online to avoid the downpours.”

Meanwhile, international sales, which account for 65 per cent of total sales, jumped 49 per cent over the quarter with US sales up a staggering 83 per cent year-on-year to £13 million.

“Our UK performance was particularly encouraging given the current climate at +8%,” he said.

“Our International business grew by +49% driven by a strong performance in the US, +83% and our rest of world category (predominately Australia) at +61%.

“International sales now represent 65% of the total up from 57% last year.

“We remain positive in our outlook, and continue to trade in line with expectations.”

In recent times, Asos has outperformed competitors in social media interaction and Jaana JÃ¤tyri, CEO of fashion trend forecaster, Trendstop.com, believes that the e-tailer‘s dominance in the online space is key to its success.

“The contrast between online retailers and their high street counterparts is becoming increasingly stark,” she said.

“Agility is at the heart of the ASOS proposition. As an online play it can react rapidly to the ever-shifting fashion landscape, add lines, ditch lines and penetrate new markets quickly.

“With a global client base and localised websites, ASOS is resilient to the ups and downs of domestic markets.” 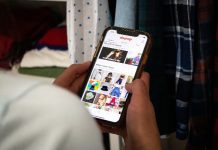