Following days of speculation which saw the Arcadia-owned company take to social media to build anticipation for the campaign using the hashtag #whosthatgirl?, Topshop has now revealed the star‘s identity following a competition which featured images of Bosworth obscured by London landmarks.

Bosworth performs classic Christmas track ‘Winter Wonderland‘ during the short film which bears the hallmarks of a cinematic production thanks to its direction by US film director Michael Polish, who took inspiration from Michelle Pffeifer film ‘The Fabulous Baker Boys‘ and its famous piano scene.

Wearing a custom-made evening dress from Topshop which she helped to design in collaboration with its design team, Bosworth also wore shoes in the short which will be available as a special made to order via the brand‘s website in conjunction with its new LA store opening in February 2013.

Commenting on Bosworth‘s starring role, Topshop‘s Chief Marketing Officer Justin Cooke, said: “There is still no greater inspiration than our icons – women have always aspired to look and feel like the stars of silver screen and we wanted to capture that emotion and the magic of Topshop to celebrate the festive season.”

Topshop‘s campaign has been unveiled significantly later than other high street retailers, with the likes of John Lewis and Asos having launched their own marketing drives some weeks ago tough, like John Lewis, the retailer has it‘s sights set on a Christmas hit.

Available through iTunes, Shazam and Spotify, the track will also sit alongside previous Bosworth movies, as well as other films directed by Polish and Pffeifer‘s inspirational turn in ‘The Fabulous Baker Boys‘.

In keeping with the digital theme of the film, which will run across all social media platforms, cinemas, digital billboards and screens set up in flagships, Bosworth sent a personalised digital message to Topshop‘s registered customers regarding the film.

Bosworth said: “This project brings together two important aspects of my life: cinema and fashion. I have always been a fan of the Topshop brand and it has been an honour to work with Sir Phillip and the team. I hope everyone enjoys watching it as much as we did making it.” 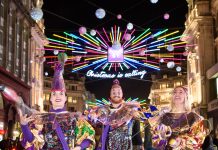 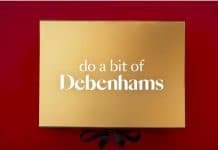