Supermarket giant Tesco have announced a 23.5 per cent fall in profits for the first half of the year as like-for-like sales in the UK dipped 0.5 per cent.

The group, which made sweeping changes to its senior management team this August, said group trading profit in the UK rose 1.5 per cent ‘despite continuing challenges.‘

The supermarket took heavy losses in European markets where profits fell 67.8 per cent to £55m.

Rivals Sainsbury‘s announced a 2.1 per cent rise in like-for-like sales for the second quarter as it continues to perform strongly in the UK.

Despite the sharp drop in overall profit, Philip Clarke, Chief Executive, Tesco said the company have made further progress to grow its online offering and have strengthened its UK business.

“We have continued our focus on becoming the leading multichannel retailer. Our online grocery businesses have continued to perform well across the Group, and we are now offering the service in over 50 cities across nine markets outside the UK.”

The results come as Tesco sold the majority of its US Fresh & Easy business to investment company Yucaipa, and announced a joint venture with leading food retailer China Resource Enterprises (CRE.) The supermarket will take a 20 per cent stake across 3,000 Chinese stores.

Neil Saunders from Retail analysis agency Conlumino said that Tesco‘s strategy of switching its emphasis away from aggressive expansion was a sensible one.

“Over the medium term this will pay dividends and, we believe, will translate into genuine and sustainable sales growth,” he said.

“Tesco knows what its issues are and is actively addressing them. It will have to work increasingly hard to get the whole group back firing on all cylinders but the management capability, resources and focus are all in place to meet that challenge.” 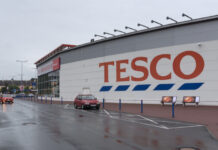