We live, and shop, in an ever more globalised world. International e-commerce has been growing particular quickly in the UK: £165m packages were shipped abroad by UK e-tailers last year, 16.3% higher than in 2013. A key factor in that growth is the increased facility provided by payments companies like Stripe, which allows retailers to accept payment in 139 currencies instantly, providing them a radical competitive edge.

Companies such as Always Riding, a UK-based e-retailer which specialises in cycling gear, have seen much greater international success rise after beginning to work with Stripe. Always Riding, which has operated with an international outlook since its inception, now accept payments in 13 currencies on their website, which is navigable in English, Spanish, German, French and Japanese.

“This has been especially pronounced with US and Japanese transactions, two of our biggest international markets. For example we‘ve seen conversions in Japan increase by over 50% since switching.”

Harrington also identified the importance of consumers being able to buy easily with as few clicks as possible and save their card details to encourage repeat transactions. Stripe also prides itself on the reliability of its payments system across multiple platforms, which has no doubt also proved a factor in repeat business.

Stripe, which ranks as one of the world‘s fastest growing international payments companies, recently raised $70m on the back of a $3.5bn valuation. 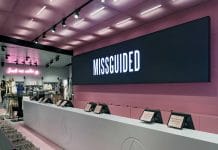