Analyst firm Verdict Retail‘s latest report states that this growth will be driven by the rising trend of purchasing stationery as gifts, increased product ranges, and design-led products and innovation.

The firm said new entrants such as Smiggle from Australia and the impending arrival of Typo, another Australian stationery retailer, have made the stationery sector more competitive.

“Increased product choice of premium stationery and availability of extra services such as personalisation mean shoppers are increasingly opting for stationery products as gifts.

“UK retailers are benefitting from shoppers who purchase stationery for a variety of occasions. For example, stationery is bought for children for the back-to-school period, for seasonal holidays such as Christmas, and for other occasions such as birthdays and Mother‘s Day.”

Meanwhile in the last five years, drawing instruments and accessories became the fastest growing categories and will continue to dominate in the next five.

However, growth of the paper and notepad, storage and other stationery categories slowed in terms of value and volumes in the negative, with expectations it would continue to decline in the next five years.

Verdict Retail said one of the main reasons for this fall in sales was the ongoing digitisation and the rise in ownership and usage of technological devices, meaning stationery is being used less and does not need to be replaced as frequently as it did a decade ago. 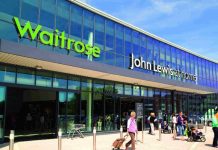