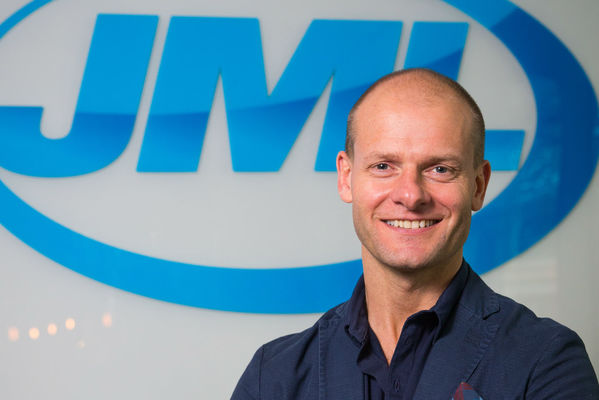 JML has become one of the most recognisable retail brands in the UK, not least because of its innovative and often novel products, but because of its unique business model.

It sells everything from cat toys to copper-stone frying pans and does so in a way almost no other retailer does, and certainly not as successfully.

Chief executive Ken Daly has been a part of JML since close to its inception 30 years ago, when it was launched by prominent Labour party donor John Mills (spawning the acronym of John Mills Limited) in his Camden basement.

“There were four people when I started, I was employee number five. I came in as a sales person,” Daly recalled.

“The business started with live demonstrations in places like the Ideal Home exhibition. When I came in, my job was to sell products into retail, so really we‘ve been in retail just over 20 years.”

It now holds concession stands in a wide variety of the country‘s biggest retailers like Asda, Boots, Wilko, Debenhams and Robert Dyas. Each of these will have JML‘s iconic TV stand, running adverts about its various products.

“One of the major unique selling propositions of JML is pretty much every product we launch has a video. Most of the time we make the video ourselves, sometimes a supplier will make the video,” Daly continued.

“I‘d go to a retailer and say if you buy a minimum quantity of these we will give you this video unit and the video tape to promote the product.

“That‘s basically been the core of the business. That‘s been very successful and has grown over those 20 odd years.”

This unique method of retail has become synonymous with JML and has proven especially profitable for them. They also remain one of the only retailers to continue to use this method.

“Generally, about one in five of the products we launch we will then roll out. There‘s a huge amount of testing involved.”

“The great thing about videos is you can put them into stores where perhaps you couldn‘t afford to pay a person to promote the product. The economics wouldn‘t stack up having a person instore,” Daly said.

“The DNA of the company has been videos in stores and that evolved into TV advertising, and then online. We‘re perfectly positioned to capitalise on video content online.

“Every JML product has a story to tell, and the video tells the story. A typical JML product, if it just sits on the shelf, people don‘t know what it is or what it does and they don‘t sell very well.

“When you put the video there it sells like hot cakes. We don‘t see it as advertising, we see it as more a demonstration.”

JML‘s particular product range goes hand-in-hand with this method of selling, as both are distinctly recognisable from the rest of the retail landscape and each is as much as a unique selling point.

Aside from being a retailer, many fail to realise that JML creates the majority of their own products, pumping vast sums into research and design.

“We spend a lot of time researching the US market. Sometimes we have inventors that come to us and we‘ve had inventors days where inventors come and pitch their products. Mostly we just come up with the ideas ourselves,” Daly commented.

“We tend to come up with products which are evolutions of previous products. We‘re looking at hundreds of products every week, we have to hone that to a more manageable number.

“Once we get to a product we think is worth developing we package it, create the video then we do retail sales trials.

“Generally, about one in five of the products we launch we will then roll out. There‘s a huge amount of testing involved.

“We invest a huge amount of money in product development, it‘s a major cost of doing business but nothing could be more important. That and people are the two most important things to invest in.”

“We‘re having a record year for international distribution. If they‘re a distributor the risks are low and the investment is low.”

In fact, Daly can credit himself with products within his own line, something few chief executives can claim. It is also apparent that he has a genuine and heart felt belief in his own products.

Commenting on JML‘s copper stone pan range, his own brain child, Daly said: “Honestly it will be the best pan you have ever used, I am evangelical about these pans. It‘s just a brilliant product.”

Despite what seems to be a foolproof retail model, JML recently shut down swathes of international operations.

“We grasped the nettle last year and closed them both down. It was an expensive process quite frankly. We took some terminal losses. That pretty much accounts for the losses last year.”

This set back seems to have had little impact on Daly, or indeed JML. Sales in the UK remain strong, even in the face of declining sales and footfall of the supermarkets it sells in.

Having moved away from the loss-making subsidiary model, and instead focusing on creating international distributors, Daly is optimistic about JML‘s future.

“We‘re having a good year this year, what you saw last year you‘ll see a complete reversal this year,” he stated.

“This doesn‘t mean to say we don‘t have international aspirations, quite the opposite in fact. We have a very successful international distributor operation.

“We have distributors in about 70 countries which have always been profitable, just very small. Our plan now is to replace our subsidiaries with distributors. The sky is the limit for international model.

“We plan to double the size of the business in the next three years. We‘ve had a year in a half of consolidation where we closed down the loss making part of the business, now were back in full effect on the expansion trail.”