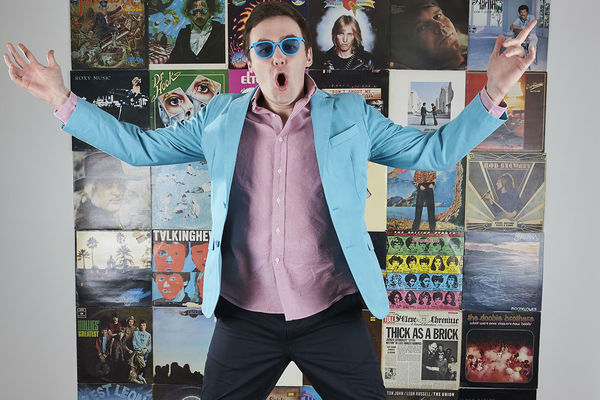 He may have only established his brand in 2014 and already has an impressive list of A-list celebrities wearing his clothes, but for Tom Cridland, none of them compare to Nigel Olsson – the renowned drummer for Elton John since 1969.

“As I play the drums myself, it was a huge buzz to hear how much he loves our designs,” Cridland told the Retail Gazette.

“Though we‘ve made clothing for… many other actors and musicians I hugely respect since then, Nigel has actually become a friend of mine and Debs‘, so he‘ll always remain one of our favourite ever customers.”

Cridland’s fashion career began at 18, when he sold nearly £3000 worth of “SWINE 09” t-shirts in a single week of school and donated all the profits to MÃ©decins Sans FrontiÃ¨res.

In January 2014, aged 23, he used a £6000 government start-up loan to establish his eponymous label Tom Cridland, specialising solely in creating the “perfect pair of trousers”.

He quickly repaid the loan in a couple of months thanks to the organic growth of the business – and with the help of his girlfriend of seven years Debs – Cridland has since built his label into an online luxury menswear retailer that sells directly to customers across six continents.

“Starting a full fashion label with just £6000 was certainly a challenge, especially when I was 23, fresh out of university and had no previous business experience of any kind,” Cridland recalled.

“I‘ve always put in 110 per cent though and I try to remind myself as often as possible how lucky I am to do something I enjoy for a living.

“I wanted to create a direct to consumer fashion brand offering luxury clothing at affordable prices by cutting out pointless retail markups.”

Since then, Tom Cridland apparel has been worn by the likes of Leonardo DiCaprio, Hugh Grant, Stephen Fry, and Daniel Craig.

Not bad for an independent retailer and designer who started from scratch almost three years ago.

Last year, Cridland launched The 30 Year Sweatshirt, a sustainable fashion project in the form of a luxury cotton crewneck backed up with a 30-year guarantee.

The concept grabbed headlines and Tom Cridland soon garnered a reputation as an international sustainable fashion brand and retailer.

The guarantee means if a Tom Cridland sweatshirt needs repairing, it would be done so for free in that 30-year window since purchase – therefore reducing its toll on the environment.

However, Cridland is confident the quality of his clothes will last that long anyway, and he‘s already expanding the concept in his label.

“We‘ve just launched The Entrepreneur‘s Shirt, our first-ever buttoned shirt, which comes with our signature 30-year guarantee and is available now on Indiegogo to support the charities, DEKI and Young Enterprise,” he said.

When asked about expanding Tom Cridland into physical stores, Cridland said he would consider it but he refused to make any compromises.

“We‘ve had interest from the likes of Saks, House of Fraser and Le Bon Marche but, unfortunately, we‘ve not been willing to compromise on our philosophy of affordable luxury enough to make the margins work,” he said.

While his brand had its first foray into bricks-and-mortar retail earlier this year, there were no future plans “for the time being” to set up a permanent, standalone Tom Cridland store.

“I would, however, be open to the idea of a summer pop-up in colourful resort town in Europe, perhaps in Italy or France. Or, of course, a boutique in West Hollywood,” Cridland said.