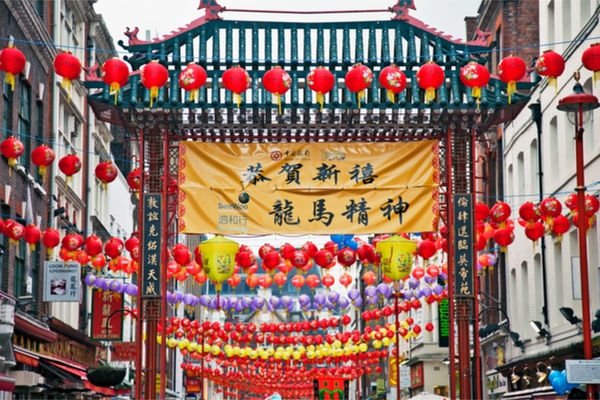 Saturday January 28 marks the beginning of Chinese New Year, with millions of tourists from Asia expected to flock to the UK to celebrate the start of the year of the rooster.

Data from Visit Britain suggests that flight bookings from China to the UK are up 81 per cent compared to the same month last year.

Aside from this being an important opportunity for retailers in terms of sheer numbers, it is especially so due to the surprise prominence of Chinese tourist spend since the Brexit vote.

For Chinese visitors, prices are the equivalent of 11 per cent cheaper in the UK than they were a year ago. This means tourists from China spend an average of 15 days in the UK, compared with just eight for other countries, and spend more than three and a half times that of the average tourist — roughly £2174 per person.

Worldpay suggests this means Chinese tourists could spend over £11 million in London over the coming week alone, with luxury brands expected to see a 40 per cent hike in tourist spend.

While this is a golden opportunity for retailers, they must be prepared in order to make it a success.

“Chinese New Year and Golden Week bring with it an opportunity in the UK that retailers mustn‘t ignore,” Salmon head of retail marketing Patrick Munden said.

“Golden Week encourages Chinese shoppers to travel abroad, and UK vendors must recognise the opportunity in front of them and capitalise by implementing a strong multichannel offering.

“There is no secret of consumers‘ gradual shift away from traditional sales like Christmas, in favour of bigger retailing events that embrace discounts and drive footfall.

“Salmon‘s own data found 28 per cent more orders were placed across the Black Friday period than during the peak festive period, as shoppers look elsewhere for bargains rather than just at Christmas and the beginning of January. December‘s ONS figures further back this trend, with online sales increasing by 21.3 per cent but falling month on month by 5.3 per cent.

“The retailers who ‘own‘ events like Chinese New Year and capitalise on the customers travelling abroad are the ones that will reap the financial and loyalty successes that will surely come with it.”

Many retailers are aware of this trend, and have worked to position themselves in order to reap the maximum benefits from alternative sales dates like Chinese New Year.

New West End Company chief executive Jace Tyrrell said: “The West End is setting the scene for a prosperous Chinese New Year, with sales to Chinese shoppers up 121 per cent on 2016 in the week prior to the main event.

“To put this into perspective, domestic and European spend in the same period were up by just 10.2 per cent and 12.6 per cent respectively.

“The Spring Festival has long been a key date in the West End calendar. And with last year‘s Golden Week proving particularly popular, with average transaction values at £1049, we are anticipating a similar uplift in sales over the New Year.

“Although the holiday was traditionally used for family get-togethers, more and more Chinese citizens are opting to use the break as an opportunity for travel – and with the dates this year allowing for a possible ten-day break, many are choosing the West End as their go-to shopping destination to enjoy the holiday.”