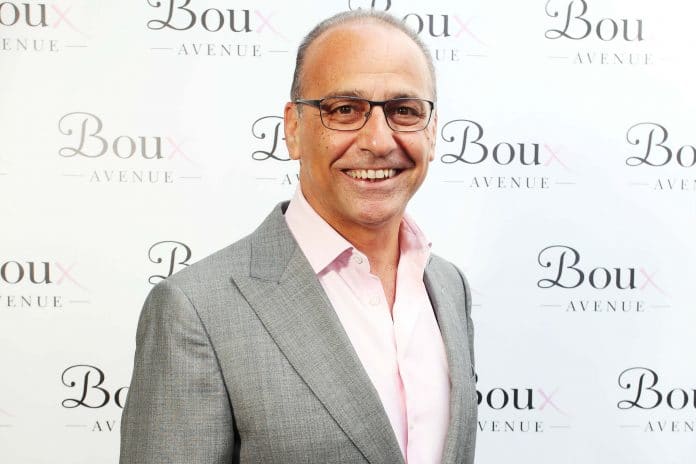 When the Retail Gazette caught up with him at the launch of Boux Avenue‘s spring/summer campaign launch, the near-collapse of Agent Provocateur was still quite fresh.

But Paphitis – who not only owns Boux Avenue but also Robert Dyas and Ryman – dismissed the notion  that lingerie was facing the same issues plaguing fast fashion and department store chains.

He also highlighted how Agent Provocateur catered to a different market and sold a different type of lingerie range.

“As with lingerie as a whole, it‘s doing just fine. We know we‘ve done well.”

Indeed, since its launch in 2011 Boux Avenue has grown rather quickly and is now a big contender within lingerie retail, with 28 stores across the UK and an additional 12 overseas.

And as some retail sectors continue to go through a turbulent period, Paphitis has insisted in various media interviews that none of his retail chains face administration worries whatsoever.

He even pledged to pay all his staff the proper living wage within three years, with a third of his Boux Avenue staff already on the Living Wage Foundation‘s £8.45 an hour rate, or £9.75 per hour in London.

Paphitis‘ personal wealth is thought to be £250 million, which derived from ventures in property finance and telecommunications, but more significantly, through his ownership of retail chains.

When Ryman went bankrupt in 1995, he  approached the administrators and bought the stationery retailer. His turnaround strategy for the heritage brand was a success, and cemented his reputation for turning failing companies into highly-profitable businesses.

He even rescued Millwall Football Club from administration in 1997, and was chairman of the club until he stepped down in 2005, not long after it reached the 2004 FA Cup Final.

Boux Avenue is not Paphitis‘ first foray into lingerie, either. He previously owned La Senza, which he famously acquired for “a quid and 40 Benson & Hedges” in 1998 and sold for £100 million in 2006.

For a man who grew up in a council flat with a single mother, left school at 16 with dyslexia, and doesn‘t have a university degree – Paphitis embodies the rags to riches success story.

However, given he immigrated to the UK as a child from Cyprus, he grabbed headlines last year when he indicated he would be voting in favour of Brexit.

Almost a year after the referendum took place, he believes the UK made the right decision.

“We‘re European. We want to have a partnership but we can‘t live together. It‘s very simple,” Paphitis said.

“You‘ve got this big rambling old house that‘s falling apart at the seams, and they keep putting people in it.

“If we live in our own house, then if people want to visit, they can come and visit. It‘s as simple as that.

“I did not vote Brexit only because of immigration. I voted Brexit because it‘s a flawed experiment.”

“Now, everything above that becomes politics. Which is why we rely on our politicians.”

Paphitis hoped the negotiation process for Brexit would work in the UK‘s favour.

“It can either be good, or bad. These issues will be proved only by the quality of our politicians. Nothing else,” he said.

The Retail Gazette asked if he was confident his employees who are EU nationals would remain in the UK once the Brexit negotiations are over.

“Let me make it absolutely clear,” he replied.

“I voted Brexit. I did not vote Brexit only because of immigration. I voted Brexit because it‘s a flawed experiment. Even a child can tell you it can‘t work. You can‘t have monetary union without political union.

“Do we want to be part of the ‘Federal States of Europe’? No we don‘t.

“Do we want people to come here and work and live with us? Yes, we do. We always have.

“If you are here, and contributing, why would I have a problem with you? I am one of them. I‘m a bi-national that always loved to come here and contributed, and was welcomed.”