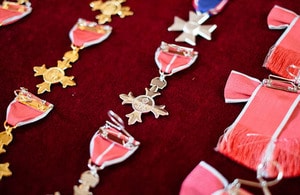 The founder of frozen food retailer Iceland and the chairman of cobber chain Timpson have both received a knighthood in this year’s Queen’s birthday honours.

Malcolm Walker, the founder of Iceland, was recognised for his services as an entrepreneur.

He was fired from Woolworths in his 20s for moonlighting, before he went on to launch Iceland in 1970 in Oswestry, Wales, with a starting capital of just £30.

The brand soon expanded from that small humble store to a chain that traded all over the UK.

Iceland now employs more than 20,000 in over 700 stores across the country – with the head office in Deeside, Wales.

Meanwhile, John Timpson, chairman of the shoe-repair and dry-cleaning company Timpson, was recognised not only for his services to business but also for his charitable work.

Alongside being a father to five children, Timpson and his late wife Alex fostered 90 children throughout their marriage.

Timpson has run eponymous business – which was founded by his great-grandfather in 1865 – for 42 years and is known for his “upside-down” management approach and often employed ex-offenders to give them another chance at life.

“I receive this honour with great pride and a certain amount of sadness. I was very much the junior partner on the fostering front, and my late wife Alex also had a fundamental influence on all that I‘ve done in business, so I‘m bound to regret that she‘s not alongside me to be properly recognised as Lady Alex,” Timpson said.

“I hope that I can put this recognition to good use by promoting our involvement with employing people from prison, encouraging every school to understand how to look after looked-after children, and – being frank about my own difficulties – develop a greater understanding of stress in the workplace.”

Other retail figures who have been honoured include  Marks & Spencer‘s style director Belinda Earl, who recognised for her services to retail with an OBE, and while Sydney-based Westfield founder Frank Lowy was appointed Knight Bachelor for his contributions to the UK economy and for opening two of Europe’s largest shopping centres in London.