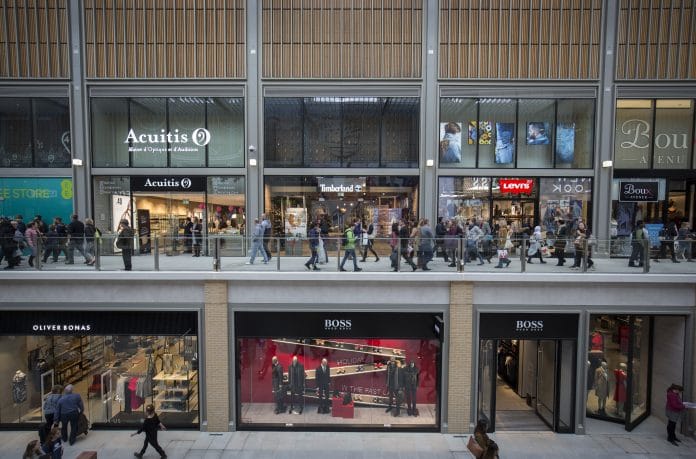 Oxford is iconic for many reasons. It’s home to perhaps the world’s most revered university, it was the birthplace of Alice in Wonderland, it was set to be the capital of the UK had Hitler successfully invaded, and it was home to the world’s first public museum.

Aside from its historical trump cards, today it hosts a bustling community of 23,000 students as well as countless tourists coming to soak up the city’s heritage.

Yet what seemed to radiate from this city, just as a sense of history does from its antique structures, is that its retail offering was limited.

This became clear during my short walk from the station through the city centre, where it raised the question as to why only now with the opening of the 800,000sq ft development of the Westgate shopping centre, has this been addressed?

As leasing manager of the development’s partner Landsec Dominic Chambers said, Westgate is “a game changer for Oxford”.

Welcoming the public for the first time today, ahead of 10 days of launch events, the new centre has introduced some big brands to the city, including Uniqlo, Ted Baker, Victoria’s Secret, MAC and Nespresso Boutique.

What’s striking about the new development is its scale. In contrast to the small-town feel of the streets in the rest of the city, the open spaces and natural light of Westgate make it memorable.

Not only does it feel different to the rest of the city, but each of Westgate’s four buildings feels different from the last, having been designed by four separate Architects. The first of these is a 140,000sq ft John Lewis which anchors the entire centre.

Along with another two brand new buildings, the department store was built on top of a car park constructed in the 1970s to serve the original Westgate shopping centre.

Before its redevelopment, for 20 or so years Westgate had seen continual decline.

“There’s been a lack of investment because people have been talking about redeveloping it for a long time, so what was there towards the end wasn’t doing Oxford a huge amount of favours,” Chambers told Retail Gazette.

“It was the absolutely perfect opportunity to create something of this size because the current retail provision in Oxford is pretty limited, it’s a very small city centre and the catchment is fantastic. It’s been crying out for it for a long time.”

While Oxford may be an obvious investment for retail, the city has essentially held back redevelopment until now. The new shopping centre had to fit in with the historical aesthetic.

Before construction began, an archeological dig was undertaken underneath the old car park, bringing this responsibility to the forefront of priorities for Landsec.

“Westgate is the west gate of the old Oxford castle. The castle dates back to the 12th century which is just adjacent to Westgate. Essentially, we knew there was a friary underneath the old carpark which was built in the 70s,” she told Retail Gazette.

After purchasing the site in 2010, it took Landsec a lengthy four years to secure planning permission, having worked closely with the local community.

“To be honest I think it’s a really positive experience because we worked really closely with all the heritage people, the Oxford Heritage Trust, the city council and the county councils to create something which has all the influence of Oxford,” Mees added.

“We don’t see it at all as a negative, it’s a real positive working with all those stakeholders.

“It’s more like part of the city. It’s not just something that is inward looking and is external facing.”

Not only were measures taken to ensure Oxford’s heritage was a part of the new centre, but more modern quirks were also accounted for.

Westgate was designed to accommodate Oxford’s cycling community, with a cycle route actually running through the centre. There are also over 1000 spaces to park and lock up bikes.

In addition, the centre is set to transform Oxford for the 23,000 students living there, with shops opening past 5.30pm for the first time.

Its leisure offerings and restaurants, including a roof garden with a view of the city’s iconic spires alongside a Junkyard Golf club and Curzon cinema, will also provide an anchor for the city’s nightlife.

From the mosaic made from the findings of the archaeological dig to the Alice in Wonderland references dotted throughout, Westgate is both a celebration of Oxford’s heritage and a vessel to bring it into the present.