Luxury fashion retailer Coach has announced the appointment of Ralph Lauren’s Fredrik Malm as its president of European and international divisions.

He will leave his role as president of sales at Ralph Lauren where he has worked since 2011.

Prior to this, Malm worked at Ecco for four years, where he acted as retail director.

In August it was revealed that the Coach’s current president of Europe Andrew Stanleik will depart the retailer to join beauty brand Coty.

Both will report to chief executive Joshua Shulman, who was appointed in April.

This comes just below the median Wall Street estimate of $5.92 billion (£4.57 billion). 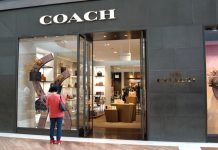