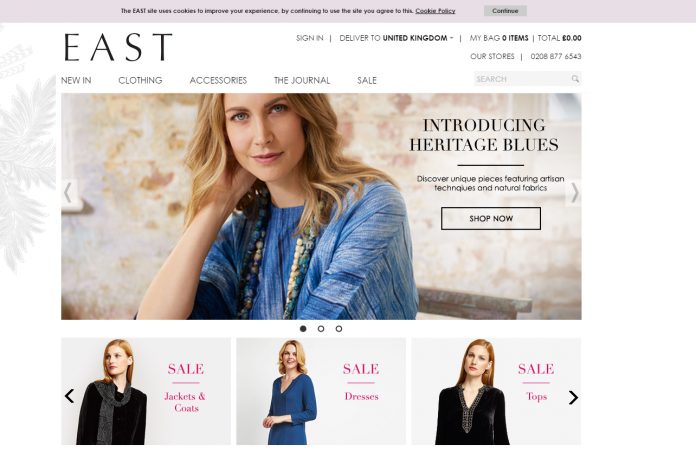 Fashion retailer East has entered into administration for the second time in less than three years, plunging 314 staff members into uncertainty.

East will continue to operate while the administrators analyse options for the sale of all or parts of the retailer.

The womenswear brand, founded in 1994, currently has 34 shops and 15 department concessions after an insolvency process three years ago reduced its store estate.

In June 2015, East closed 15 stores and five concessions after a new company called East Lifestyle bought certain parts of the retailer back in a pre-pack deal worth £3.4 million.

The deal was also aimed at offloading loss-making shops and secure its future.

In September 2016 Fabindia, the owner of East, sold an 80 per cent share in the retailer to New York-based investor Rahul Kakar of Crore Capital.

For the latest collapse, East blamed tough trading due to shoppers reining in their spending and high street footfall plummeting.

The news also follows a strong Christmas trading period, in which it posted a 6.5 per cent uplift in like-for-like sales, boosted by a massive 32 per cent year-on-year increase in online sales.

“The retailer was making progress to expand its footprint, particularly looking at international opportunities. However, it has been unable to secure the necessary funding to realise those plans.

“We’re now working closely with all stakeholders to evaluate the options to sell all or parts of the business.”